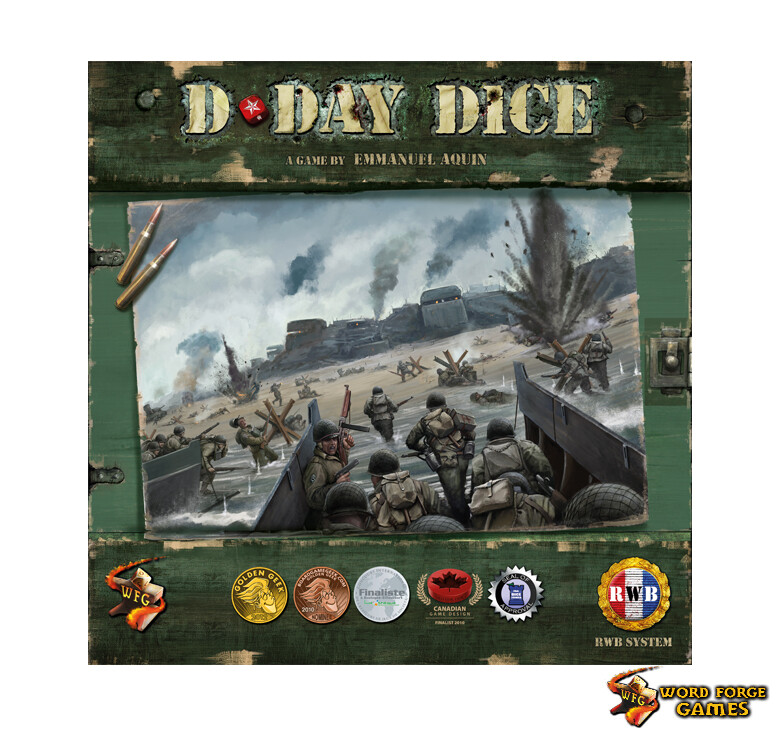 The 2nd Edition of D-Day Dice, published by Word Forge Games, sees new art, new maps, and revised cards and rules. It is fully compatible with the previous version, but adds new mechanics and play concepts to the highly successful D-Day Dice franchise. Normandy, June 6th, 1944: As you land on the well-defended beaches, a German machine gun nest is killing your comrades like flies. You must do something! In D-Day Dice, players are Allied soldiers trying to organize improvised units for an attack against the machine gun nest. Each player starts the game with a unit of a few soldiers and nothing else. As the game progresses, he will collect resources and advance on the beach, sector by sector, as his unit grows stronger and deadlier. He will succeed...or die trying. D-Day Dice is a multiplayer co-op game, where all players play their turn simultaneously and must help each other in order to stay alive. It also includes solitaire optional rules. Although built around dice rolling, this game is about resource management (soldiers, specialists, items and courage) and knowing when to move your unit. Resources are kept from turn to turn, so the players can plan ahead.

In D-Day Dice, players are Allied soldiers trying to organize improvised units for an attack against a machine-gun nest. Each player starts the game with a unit of a few soldiers and nothing else. As the game progresses, players roll dice to collect resources and advance on the beach, sector by sector, as the unit grows stronger and deadlier.

D-Day Dice will get you right there on the beach. You will experience the fear of getting killed by enemy fire, the anguish of losing your men, and the thrill of surmounting seemingly impossible odds to accomplish your mission. And since this is a cooperative game, all players are on the same side, fighting like brothers (and sisters) in arms! This game can be played by anyone (you don't have to be familiar with World War II) and has been enjoyed by families and wargamers alike.