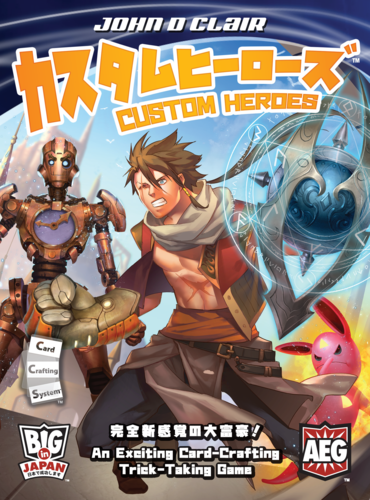 Custom Heroes is a fast-paced, strategic game of set building and strategy. Similar to Diafugo (aka The Great Dalmuti, etc.) the objective of the game is to get rid of all your cards faster than your opponents. You can play sets of cards that have the same or greater value and the same number in the set as the previous player, but you have to balance the use of high value cards vs. the risk of getting stuck with low value cards in your hand as other players finish before you.

The twist in Custom Heroes is that as you play you earn and spend Power resources which allow you to Card Craft the cards in your hand by sliding upgrades into their sleeves that overlap the card and upgrades already present to alter the value and special abilities of your cards. As each round passes the cards become more and more valuable and complex!

Custom Heroes uses a clever system of winning victory points to determine who is the ultimate winner of the game and there is a wagering mechanic that can allow for wild swings and surprise come from behind victories.

In a game that starts with more than 2 players, in the event of a Championship Round with only 2 players, the trick is taken if one of the players manages to force the other to be passed by playing the same set. In other words, there are no rule changes in a 3+ player game even when only 2 players remain.

The 2 player rules are only used if the whole game has been played by 2 players.

Kodora (buddy card): When Kodora refers to a “turn” it is the same as a hand, meaning the current hand, and if you go out of cards first you win the bet.

Spector (buddy card): When Spector refers to the “pile” it is the same as a round, meaning if, during this round, all opponents pass on your play and you would lead the next trick, at that point you get the extra victory point. If someone else wins the round in which you play Spector, you do not get the point.