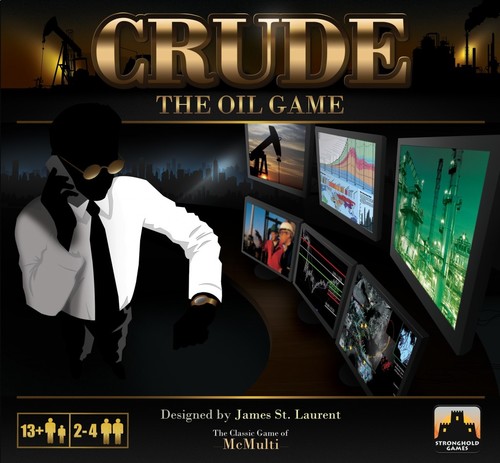 In Crude: The Oil Game, players take on the role of oil company CEOs, seeking to expand their companies into multi-national energy mega-corporations. Just as with real world energy companies, player will setup facilities for oil drilling, oil pumping, oil refining into gasoline, and gasoline selling to the consumer... all of which are represented by actual plastic pieces placed on the board! Players also speculate by buying and selling oil and gasoline barrels in both the domestic and foreign markets...again represented by actual plastic barrels in their playing area!

However, the changing economic climate, as well as sudden world news events, will challenge players to keep a long-term strategic view of the world energy markets. The first player to reach a corporation value of $750 million is the winner!

Crude: The Oil Game is not only a great simulation of the global oil markets, but with almost 300 plastic playing pieces, it is a sight to behold! Known as McMulti when it was printed in Europe almost 25 years ago, this great game is finally back in print after many years!

The history of "Crude: The Oil Game", one of the last remaining "Grail Games" for the hobby gamer:

"Crude: The Oil Game" was originally self-published by the Designer, James J. St. Laurent, in 1974 in the USA under the title "Crude: The Oil Game". It was widely received as a break-through in euro-style and economic simulating games. It was then republished in an unauthorized version as "McMulti" without the knowledge and consent of the original Designer.

As "McMulti", the game garnered even more attention due to its use of *hundreds* of beautiful little plastic pieces to represent the various game elements: oil barrels, gasoline barrels, oil drilling rigs, oil pumps, oil refineries, and gasoline station facilities.

The Stronghold Games edition of this great game includes an updated ruleset and an improved economic engine created in conjunction with the original designer, James J. St. Laurent. This will hold true to the beauty of both the game''s mechanics as well as the game components used in the unauthorized version. The plastic pieces from the "McMulti" edition have been either kept the same or *improved*. For example, the Refineries have greater detail to them, and the Oil Drilling Rigs are truly three-dimensional and stand up tall on the playing board.

The Designer, James J. St. Laurent, passed away in 2011 during the re-development of the game, causing a delay in the completion of the production. A Tribute to Mr. St. Laurent is included in the rulebook. To say the least, he was a great man, who will be missed by many.

This magnificent game includes all of the following components: