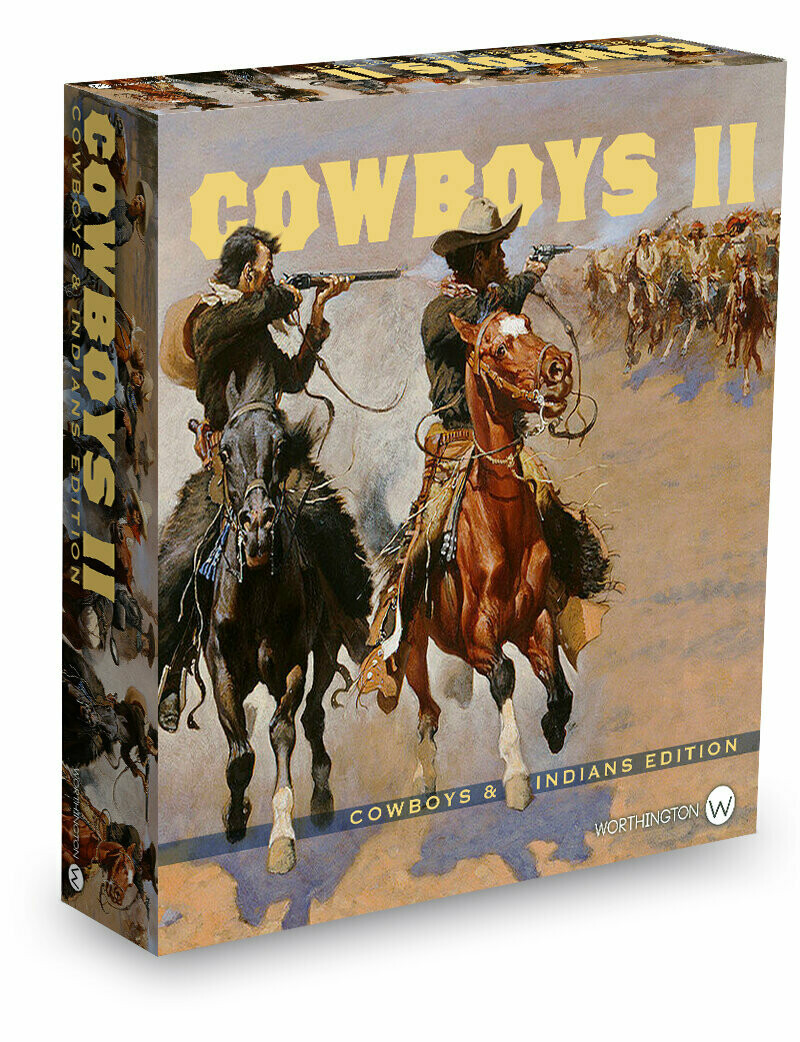 In 2007 Worthington Publishing produced COWBOYS. It was a very popular title and sold out. Now Worthington Publishing introduces COWBOYS II - Cowboys and Indians Edition, in all its 6 shooter glory. Cowboys II is a NEW game based on our original Cowboys game. All new boards, scenarios/episodes, more Cowboys AND Indians!Also new are custom, moveable terrain and cowboy setting elements that allow a complete SANDBOX environment for players to create the old west the way they like it.

COWBOYS II is a game about the old west. Some fact, some fiction, it pits opposing sides against each other, bringing to life the daring and dastardly deeds of heroes and villains when the way of the gun ruled the day. The main characters are cowboys. These were the lawmen, gunfighters, gamblers, and ne’er do wells who knew how to handle themselves during a gunfight. Also the town folk will show up to rescue the day or add a much needed gun to the fight. Watch out, you never know when the Indians are going to show up.

Some gunfighters are better than others and this is shown through modifiers for skill. Beware, being the top shot often means you are the first target. Who do you bring to the dance? Pistols, rifle, or shotgun? All are deadly. Each has limitations. And, what would a cowboy be without his trusty horse which allows him to get outta town twice as fast as boot leather and some cards and a bit of luck? A well-played hand can leave you walking from the table with a smile, and your opponent in a bad fix. Gunfights in COWBOYS II use cards to show luck (good and bad), daring, bravery (or lack of it), and skills. So take your drink, steady your hand, and prepare to slap leather and draw…

Players take control of between 1 to 10 characters in each episode, moving them across the boards trying to complete the objectives for the episodes. Sometimes it's breaking out of jail, sometimes it’s finishing off all the other characters, robbing banks, some cattle rustling, gunfights, fistfights, escaping, bounty hunting, or handling a bunch of attacking Indians.It varies by episode.

With a wagonload of episodes, plus easy design it yourself episodes possible, the action is never ending.

Cards add to the game by introducing variables to gameplay.The card deck has special abilities on each card AND is a standard poker deck in case you want to play a hand of poker!Having a good hand can help in a high stakes game.