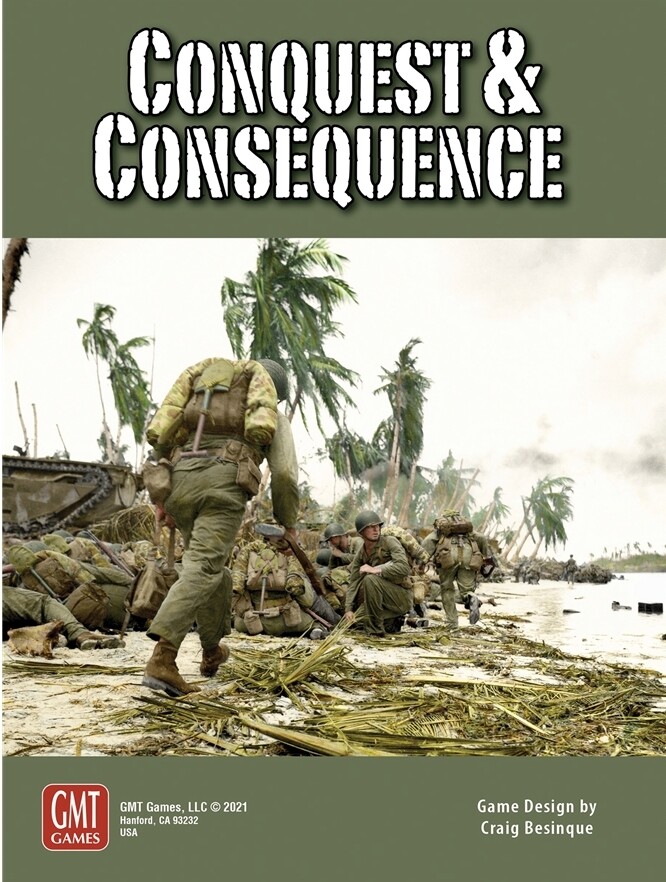 Conquest and Consequence brings the Triumph and Tragedy system to the Pacific/East Asia theater during the same 1936-1945 time period. Like T&T, it is designed for 3 players, maintaining the 3-sided dynamic that adds so much variety and intrigue to the system.

The game begins in 1936 with the Militarists in control of Japan and expansion on the agenda. Its [war] industry is well developed, but it is weak in population and particularly resources. Its battle-hardened army has easily overrun resource-rich Manchuria, and a weak China awaits.

Japan (like Germany in T&T) has the early initiative due to its well-prepared military. Will it:

Japanese aggression in China will likely irritate the sleeping giant that is the USA, but it is far away across the wide Pacific, and Japan has special naval abilities that allow it to compete at sea.

The Red Chinese have just completed their Long March and re-established their base in inland Shaansi, far from areas of Japanese (or Capitalist) interest. The Red Chinese are very weak militarily but have a secret weapon: Partisans. These are non-military “political” organizations (represented on-map with cardboard counters) that are difficult to eradicate, multiply if ignored, and can be converted into military units when desired (this being ill-advised without sufficient concentration). The Soviet Union, also acutely aware of Japanese expansionism, is desperately fortifying eastern Siberia, which is otherwise thinly defended.

Nationalist China is aware of the Japanese threat but must also deal with the internal Communist threat. The United States is disarmed, disinterested, and distracted by the Great Depression. The British Empire is woefully under-defended and overconfident. The USA alliance must build up its economy while somehow improving the military capabilities of the British Empire, Nationalist China, and itself.

The game combines the Pacific naval war and the land war in Asia (including the Chinese Civil War), both equally weighing upon victory. The naval war is dramatic, featuring short, decisive battles and expanded roles for airpower and island bases. In the tradition of Triumph and Tragedy, the 3-sided aspect features negotiation, diplomacy, and subterfuge within a multitude of strategic possibilities. Like T&T, the game allows players freedom to diverge from the inclinations and policies of the historical actors and plays in 4-6 hours of constant tension and involvement.