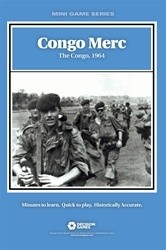 During the 1960s the newly independent Congo was the scene of constant warfare. Congo Merc is a solitaire game that puts you in the middle of that fighting with a task force of elite commandos. You conduct breakneck advances into the heart of enemy territory, seize critical objectives and, just as important, return to home base.

The game includes two decks of cards. The Mission Cards provide scenario objectives and the resources with which task forces are assembled. Missions include everything from hostage rescue to tracking down Cuban cadre. You recruit from a variety of unit types, including jeep-mounted commandos, light armor, sappers, air support, paratroopers and many others.

Congo Merc is part of the Commando mini-game Series. Once a task force is organized, you maneuver it into the Congo. The map covers the entire country, and when a force enters certain points an Event Card is picked. Events can include anything from UN intervention to ambushes by enemy fighters. There’s a range of foes, from Simba rebels to Cubans dispatched by Fidel Castro. Combat is resolved via a quasi-tactical procedure in which both tactical superiority and firepower play their parts. There are special rules for CIA reinforcements, air transport and leaders.