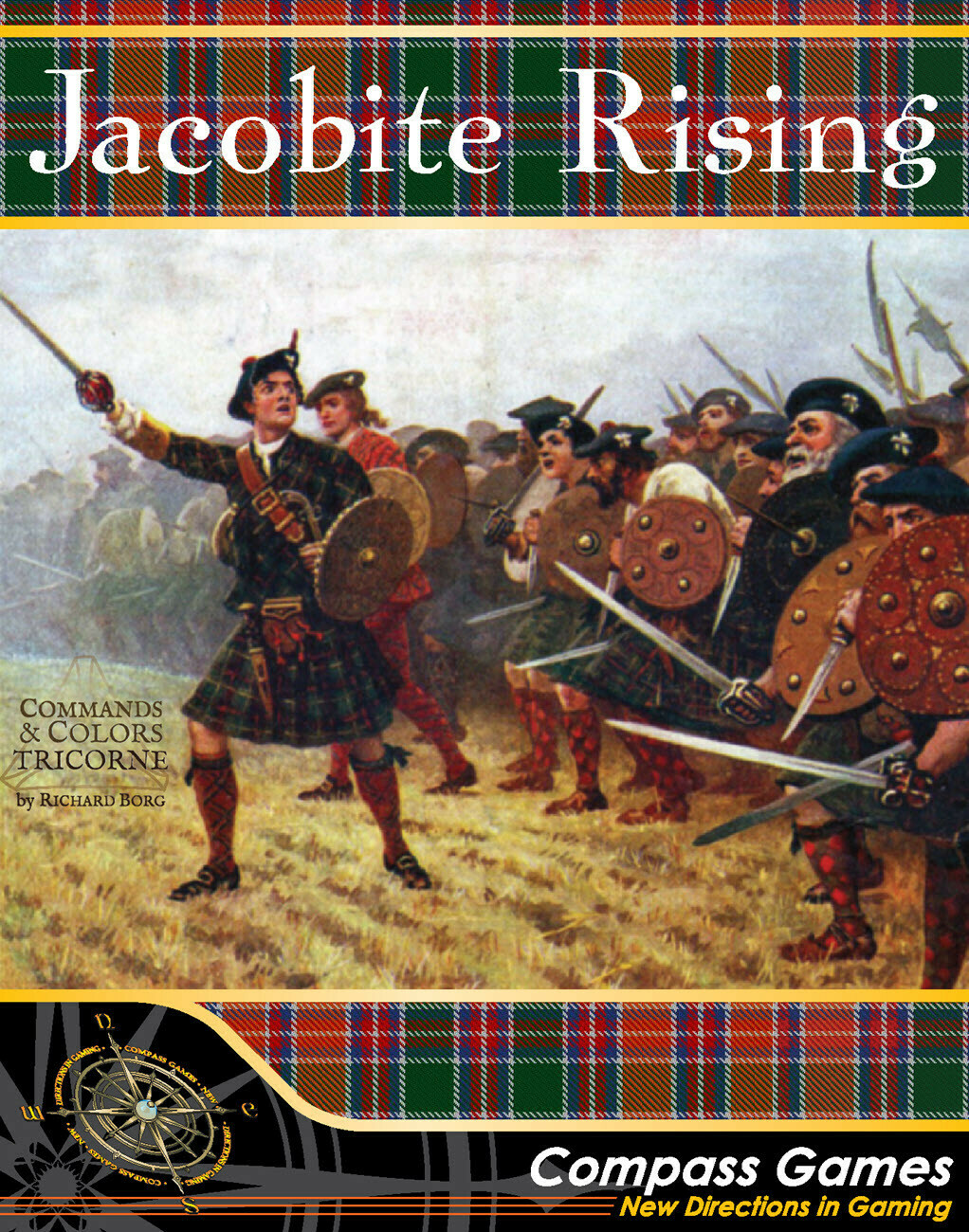 Now you are in command!

By design, Jacobite Rising is not overly complex. In a battle scenario, two players will command either the Jacobite forces or the units of the Government army. There are 13 battle scenarios in the game. A scenario’s battle notes state which player takes the first turn and players will alternate taking turns thereafter until one player reaches the number of Victory Banners indicated in the scenario’s victory conditions.

The Jacobite Rising battlefield game board has a hex grid of 13 hexes wide by 11 hexes deep. The battlefield is divided into three sections by two dotted lines, giving each player a Left Flank Section, a Center Section and a Right Flank Section. Where the dotted line cuts through a hex, the hex is considered to be part of both the flank section and the center section. Terrain Tiles represent a range of terrain features and are placed on the battlefield to recreate the historical scenario setting.

A Command card is played each turn by the active player to order troops on a player’s side to move, battle, or do something special. The mix of units both players may have under their commands include; regular infantry, highland infantry, lowland infantry, militia infantry, battle cavalry, light cavalry, trained artillery, light artillery and leaders. Units are represented by a group of 4 blocks in a hex and a single block represents a leader. Units and leaders may only move and battle when given an order. During a turn when units are battling, the battle dice will resolve combat quickly and efficiently and when the last block of an opposition unit or leader block is eliminated, a player will gain one Victory Banner. Again the number of banners needed to win is detailed in a scenario’s victory conditions.

In a Jacobite Rising Tricorne battle, unit morale is one of the main thematic concepts, as it was historically. With the possibility that an entire unit that has only taken minimal losses, when forced to retreat, may actually break and rout from the battlefield, which will definitely keep players on the edge of their command chairs during an entire battle.

To further emphasize the differences in battlefield doctrine between the Highland Clans and Government forces, each army has its own unique deck of Combat cards. These cards when played represent a mix of unit training, abilities or unexplainable actions that take place during the course of a battle.

As with other Commands & Colors games, the scale of the game fluctuates, which allows players to effectively portray some of the larger historical Jacobite Rising battles like Culloden and Falkirk, as well as smaller size skirmish actions. The 13 battle scenarios in the game present a stylized battlefield map that emphasize the important terrain features and highlight the historical deployment of forces in scale with the game system. Still the tactics of the period, that players will need to execute to gain victory, conform remarkably well to the advantages and limitations inherent to the various armies of the day and the battlefield terrain features on which they fought.

Here is the list of 13 battles and smaller skirmish actions included with Jacobite Rising:

Again, owners of Compass Games The American Revolution Commands & Colors: Tricorne will find many familiar game mechanics in this stand-alone game product, but there are also plenty of new and interesting play concepts. Concepts that add historical depth and will provide even the most veteran Commands & Colors players new experiences and challenges as they are introduced into the world of the Highland Clans in the time of the Jacobite Risings.