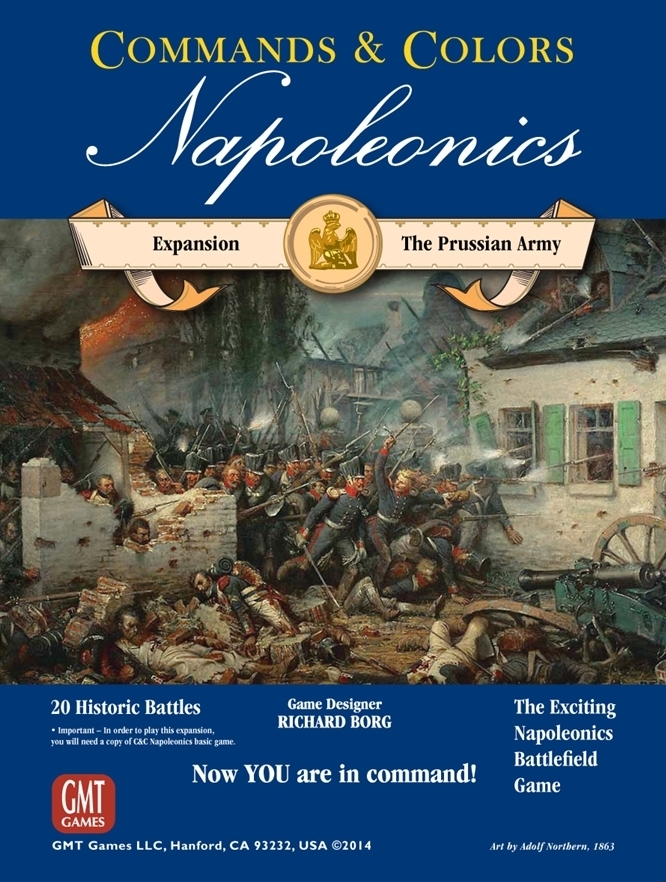 The Prussian Army is a Coalition expansion for Commands & Colors Napoleonics.

During the Seven Years’ War, small Prussia under Frederick the Great defeated the armies of Austria, Russia, and France to increase the size of its territories two fold and become a major power in Europe. But in spite of Prussia’s reputation as a formidable fighting nation, Prussia withdrew from the First Coalition as an active opponent of the French Revolution and remain on the sidelines until the Fourth Coalition in 1806.

In 1806, the Prussian Infantry were products of a system that had not altered since the Seven Years' War. The cavalry although probably the best mounted in Europe thanks to the East Prussian horse studs, were scattered among the army divisions at Jena, and were committed in numerous uncoordinated attacks. In general, the lack of coordination of the arms in combat was one of the major causes of the Prussian defeat at Jena.

In the words of Napoleon…

"At Jena, the Prussian army performed the finest and most spectacular maneuvers, but I soon put a stop to this tomfoolery and taught them that to fight and to execute dazzling maneuvers and wear splendid uniforms were very different matters."

In 1806 Napoleon crushed the fearsome Prussian military machine. The humiliation of military defeat and being forced to cede much of its territories forced the Prussian king, Frederick William III, into much-needed military reform. The new Prussian army that emerged became one of the finest in Europe., due in part to the organizational genius of Scharnhorst and Gneisenau and in part due to Field-Marshal Prince Blücher, who drove his regiments to fight with relentless vigor. In 1813 Prussia rejoined the war against Napoleonic France and the Prussian army under Blücher, although sometimes playing second fiddle to Austria, Russia and Great Britain, was a major force in bringing an end to Napoleon Bonaparte's rule.

In 1815 Napoleon returned to meet the English and Prussians, which would lead to his Waterloo. Prussia’s reward in 1815 at the Congress of Vienna was the recovery of her lost territories, as well as the whole of the Rhineland and Westphalia and other territories. Prussia therefore emerged from the Napoleonic Wars as the dominant power in Germany.

In this expansion you will find 20 historical scenarios that focus on the Prussian Army battles from 1806 to 1815 against Napoleon, plus all the new units you’ll need to field for these engagements.