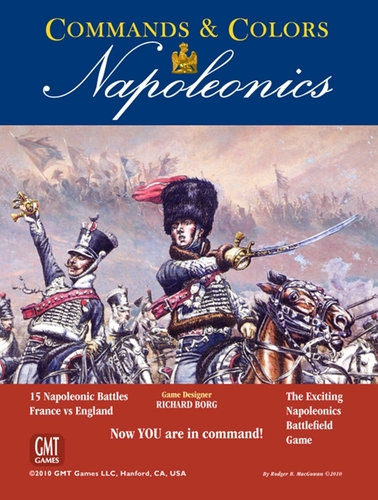 Command & Colors: Napoleonics rules at first glance may seem more complex than other Commands & Colors games, but if you are familiar with the game system, you are only a few short steps away from taking Command. Even if you have never played before, learning the fundamentals of the game system is straightforward and will be an enjoyable endeavor.

The core Wars of Napoleon game will feature French, British and Portuguese troops, while the expansions will showcase one Coalition army that opposed Napoleon.

We have developed a tabletop solo play version for Commands & Colors. It works well for the basic C&C Napoleonics. We have not figured how to work it into the solo play currently when using the Tacticians card deck.

POWER of THREE - Solo play Commands & Colors Napoleonics Command Card Play Both sides have 3 command cards at the start of a battle. Don’t look at these cards until it is the side’s turn.

The side that goes first (side A) plays one command card and completes the actions of that command card. At the end of the turn, the card played is discarded along with one of the other two cards that A side has. One card therefore is still in side A’s hand. Draw two new command cards for side A, but don’t look at these cards until it is side A’s next turn.

Side B plays one of the 3 command cards that side B has and completes the actions of that command card. At the end of the turn, the card played is discarded along with one of the other two cards that B side has. One card therefore is still in side B’s hand. Draw two new command cards for side B, but don’t look at these cards until it is side B’s next turn.

Repeat these steps for both sides A and B until victory is achieved by one side.

NOTE: Use the original Napoleonic command basic game card deck. When you get a First Strike or a Short Supply card just discard the card and draw replacement card.

The reason we enjoy the way this seems to work is because you have the opportunity to hold one card at the end of the turn, so there is a sense of some possible planning for the next turn. Of course adding 2 new cards to a side’s hand can change plans. The solo player has some indication what he may do next turn as he moves to take the other side’s hand, but the 2 new unknown cards introduce a true fog of war because of new play possibilities. Thus, the solo player remains largely in the dark about how he may respond offensively or defensively the next time he plays each hand.