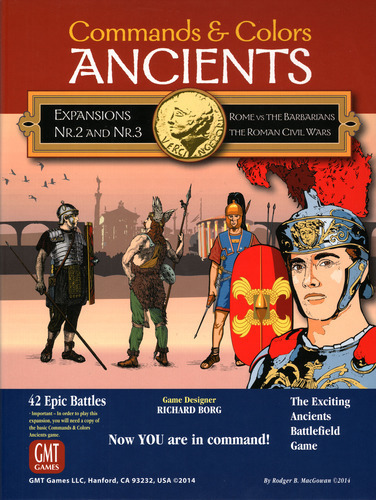 IACTA ALEA EST! (The die is cast - a phrase near and dear to wargamers). Julius Caesar spoke this phrase as his legions crossed the Rubicon, sparking the Second Roman Civil War. Leading the most capable combat-hardened veteran legions in the Roman Army, Caesar set out to subdue his numerically superior opponents - and succeeded!

Commands & Colors Ancients allows you to refight epic battles of the ancient world. In this expansion the vaunted Roman army fights and array of fierce barbarian tribes and rebellious slaves, winning smashing victories, but also suffering some of the greatest defeats at Arausio and in the Teutoburger Wald.

In this expansion see the formidable Roman army dividing and fighting itself as Julius Caesar, conqueror of Gaul, and Pompey, his former partner in the Triumverate, contend for sole control of the Roman Empire. Units in both armies can only move and fight when ordered.

The command playing cards supply those orders, providing an element of luck that creates a fog of war and presents players with both challenges and opportunities. You must maximize your opportunities by playing your command cards judiciously. How well you handle the diverse units, their weapons, and the terrain, will determine your victory.