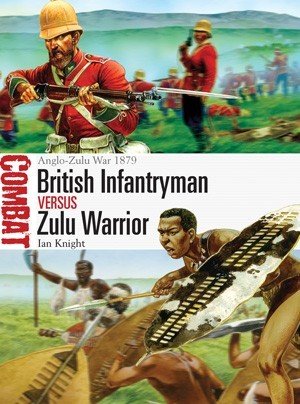 The short but savage Anglo-Zulu War of 1879 pitched well-equipped but complacent British soldiers into combat with the Zulu, one of history's finest fighting forces. The clashes between these two different armies prompted tactical innovation on both sides, as the British and their Zulu opponents sought to find the optimal combination of mobility, protection and firepower. This engrossing study traces the changing face of infantry combat in the Anglo-Zulu War. Three major engagements are detailed: the Zulu ambush at Nyezane, repulsed by the British using their established tactics; the shocking defeat and massacre of outmanoeuvred British forces in savage close-quarter fighting at iSandlwana; and the British victory at Khambula following their adoption of more condensed firing lines and prepared positions.

Ian Knight is a leading international expert on the Anglo-Zulu War. He has written, co-written or edited over 30 books, including several in the Osprey Men-at-Arms, Elite, Warrior and Campaign series. He studied Afro-Caribbean Studies at Kent University, and is an Honorary Research Associate of the Natal Museum and Vice President of the Anglo Zulu War Historical Society. He has also contributed to a number of television documentaries on the war. In 2000 he was the Historian advising the Glasgow University team who made the first archaeological survey of the Isandlwana battlefield.