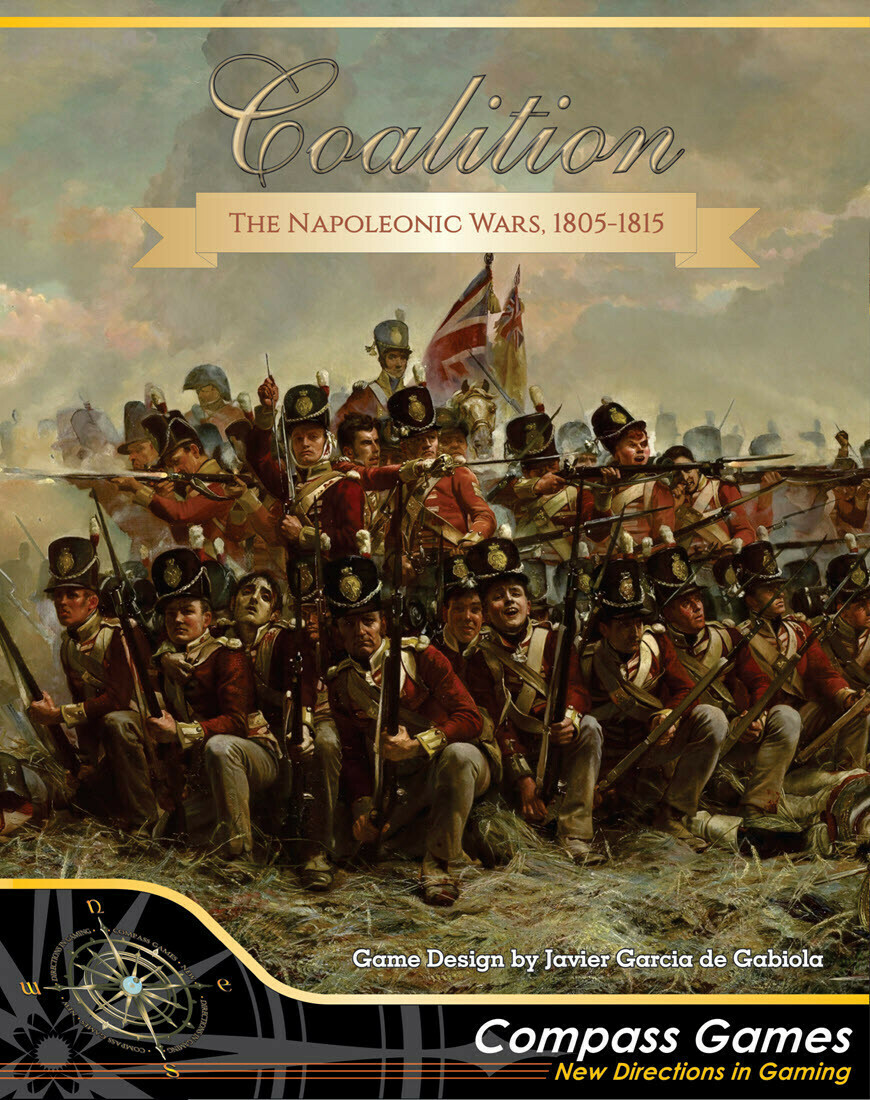 COALITION! is a game about the Napoleonic Wars (1805-1815) for two to six players that can be completed in a single evening. The scope of the game is grand-strategy with some operational components (as the execution of maneuvers as Marching to the Sound of the Guns), being the British player launching successive Coalitions to destroy France and his Empire. You will remember and reenact this flamboyant period handling historical Generals, Armies, Fleets and Event Cards. Prepare to fight from Austerlitz to Waterloo in just one evening!

The British Player will launch successive Coalitions of allied countries to destroy the French Empire, and the French player will try to survive and win the game by earning Gloire and Victory Points or by surrendering Great Britain through the Continental Blockade. Also, in the 3-6 players version, every individual player will control a Major Power with his own agenda, trying to win the game also through their own Victory and Gloire Points…

To demonstrate how the entire Napoleonic Wars of ten years can be completed in one evening, here is a sample play narrative of how the Waterloo campaign could play out in ten minutes:

In 1815, after playing the Hundred Days Event card, you have Napoleon and the Armée du Nord in the Low Countries, which is controlled by the UK player, your enemy. The UK Player has also, in two different stacks, Wellington and the Allied Army and Blucher and the Hauptarmee Prussian Army, also in the Low Countries.

After making an attrition check for all the players, the United Kingdom player acts first. In his first sub-round, he moves his Prussian Hauptarmee army under Blucher and attempts to form a stack with Wellington´s Allied Army. The French Player tries to intercept Blucher via a Maneuver action with Napoleon and the Armée du Nord. The French player rolls a dice and gets a 6, thus Napoleon and his army have successfully intercepted Blucher, and then he attacks them. Both armies having strength of 2 points, so the ratio is 1 to 1. The French player adds +2 for Napoleon and the Prussian player adds -1 for Blucher for a net modifier of +1 one for the French. The French player rolls a dice: a 5, and adds the modifier of +1. The net roll is a 6. Blucher Army is defeated and is forced to retreat and losses 1 Strength Point. As a result of his victory over the Prussians, the French player gains 1 Gloire Point. In historical terms, the players have just fought the battle of Ligny. Quatre Bras was such a minor battle that is not represented in the game…

It is now the first French sub-round. Now, the French player decides to launch an Attack against Wellington’s Allied army with Napoleon´s Army. Each side has 2 Strength Points so the ratio is 1 to 1. However, it is now Blucher’s turn to attempt a Maneuver action. Blucher attempts to March to the Sound of the Guns and to join the Battle. He rolls a dice and gets a 5, joining the battle. The players now recalculate the odds. The French have 2 Strength Points and the allied armies total 3 Strength Points. So the ratio is 2 to 3. Napoleon’s tactical rating adds +2 for the French. However, Wellington adds a -2 when defending, thus nether side receives a modifier. Seeing his chances of winning are minimal, the French Player decides to play the Grognards of the Old Imperial Guard Event Card which will add a +1 to his dice roll. The United Kingdom player responds by playing Wellington´s Reverse Slope for a -1 modifier to the French dice roll. Again, the French player is left without any modifiers to his dice. He rolls and gets a 3. Both sides suffer a 1 Strength Point loss, but it is the French player that has to retreat. The players have now re-fought the battle of Waterloo, and according to the Hundred Days Event Card, then France surrenders….

COALITION promises to deliver a playable and engaging game experience to recreate the entirety of the Napoleonic Wars in a single evening.