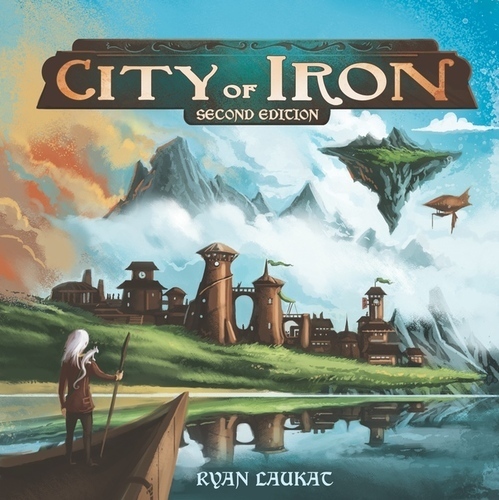 RRV-010
$49.49
Out of stock
1
Product Details
UPC: 040232312373
Publisher: Red Raven Games
Players: 2-4
Age: 13+
Time: 90 minutes
Made In: China
Designer(s): Ryan Laukat
Far away in the beautiful world of Arzium, four small nations compete to become the most powerful, rallying courageous explorers, cunning leaders, brilliant minds, and powerful magicians. The humans of the City-State of Arc value industry and growth, while their neighbors in the highlands of Cresaria seek out ancient magics and scientific advances. To the south live the toads of Om amid the verdant Emerald Hills, inventing amazing machines and gizmos to aid them. The Hog Republic to the west holds a rich military tradition and teaches ruthless strategy– in war and in business– to all citizens from a young age.
Which nation will emerge as the greatest, leading this new world of advancement into the next century?

In City of Iron, 2-4 players compete to build up a small nation in a world of machines, magic, and money. Become the leader of one of four rival nations: the industrious humans, the toad engineers, the scholarly Cresarians, or the clever hogmen.

Corner the market on goods like machine parts or bottled demons. Research steam-age technology and recruit mercenaries to control the continent. Build sea-going schooners or cloud-cutting airships to reach faraway lands and flying islands. Your cities have limited capacity, so you'll have to decide what to keep and what to demolish when building advanced structures.

The future of a nation is in your hands. Build unbreakable foundations for an empire or disappear into the dusty pages of history.