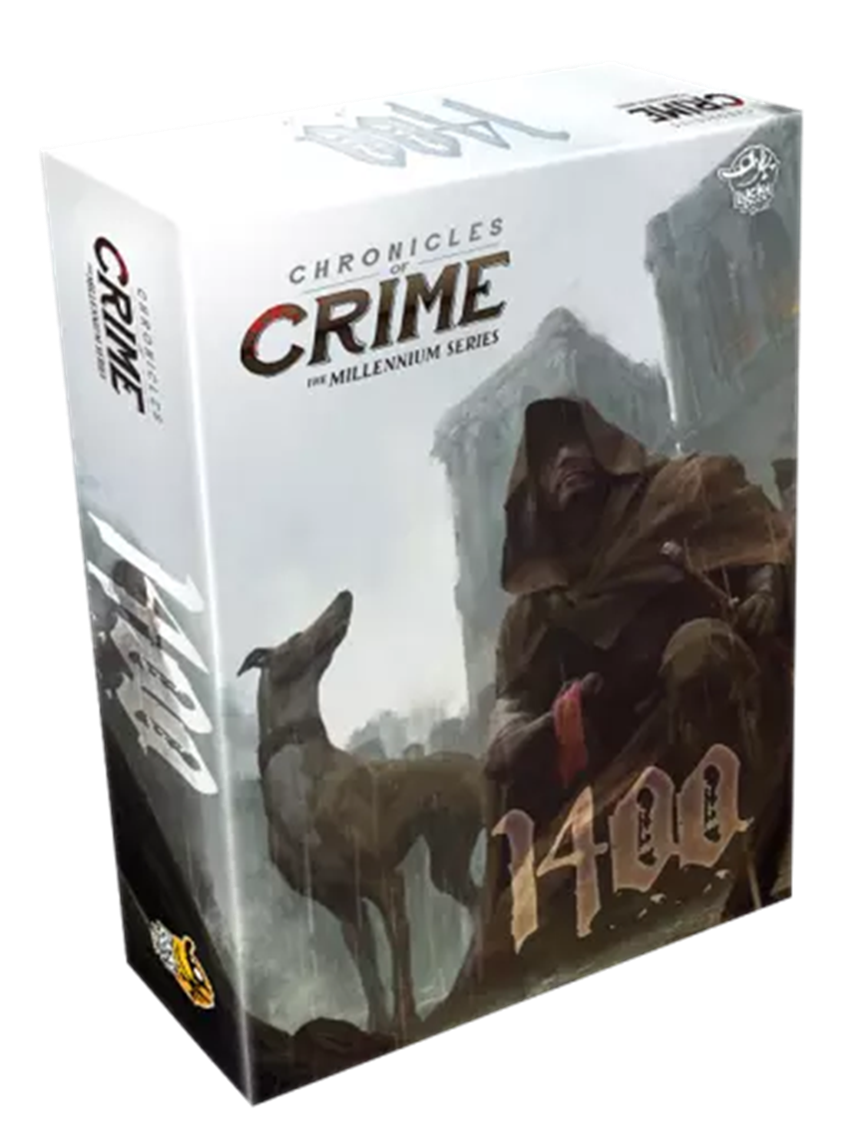 It is the year 1400 and you are Abelard Lavel, a knight living in Paris. Since you were a child, strange prophetic dreams of past and future crimes have haunted you. You managed to put your power to good use, solving mysteries that nobody else could. Now thanks to your growing reputation, the people of Paris seek your help. Will you come to their aid?

Chronicles of Crime: 1400 is a stand-alone, cooperative game of crime investigation. Using Scan & Play technology to mix digital and board games, it allows for many crime investigation stories to be told with the same components. Interrogate the suspects, collect evidence, and find the culprit before you run out of time!

Chronicles of Crime - The Millennium Series features three standalone Chronicles of Crime games which utilize the same great Chronicles of Crime system, but provide interesting gameplay twists and refreshing settings, that span an entire millennium from 1400 to 1900 and finally 2400. Players will be able to experience Paris like never before as they solve cases across three distinct time periods.

Important: This game requires an app to play, but once downloaded no Internet connection is needed to play. You currently need Android 4.4 or newer, or iOS 8.0 or newer to run the app.

Take on the role of Abelard Lavel who, blessed with prophetic visions, has taken it upon himself to root out evil in the city of Paris. At the start of each new case, you'll be presented with glimpses of visions that Abelard has seen. Features seen in these visions might be familiar, however, they could also be completely unknown, or even, have not yet taken place!

It’ll be down to you to make the connections between the visions and reality and put the pieces of the puzzle together.

Our protagonist will be left without the benefits of modern technology and crime scene investigation tools, but that doesn’t mean he won’t have some tricks up his sleeve. Abelard’s furry companion Perceval can track down the owners of items and perhaps sniff out some lies from suspects who aren’t being honest about their whereabouts.

At home, Abelard’s family are also able to support him on cases. His sister, a merchant, knows something about almost any object found in Paris, his uncle, a monk, has a wealth of knowledge about written texts, and his brother, a king’s spy, can often find information on the people Abelard is investigating.

The characters and the story form the most important and compelling part of any Chronicles of Crime case. You will meet a huge variety of characters from professors to market vendors, the nobility to the peasantry, and it will be down to you to decide who is worth your time investigating and who is going to waste your time with their personal issues.

Surrounding each case is a vivid world depicted not only in beautiful locations but also in virtual reality crime scenes. You will use the Chronicles of Crime app to inspect all the details of each crime scene and you’ll have to cooperate to pick out the important evidence quickly.

So are you ready to face the challenge of tracking down the criminals and wrongdoers of medieval Paris? The city awaits!