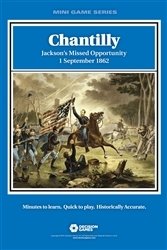 After the Confederate victory at Second Bull Run in August 1862, Stonewall Jackson led his wing of the Confederate army to get behind the retreating Federals and finish the job. Mud and fatigue slowed him just enough to allow some hastily-collected Federal units to get in position to stop him. The result was a confused battle near Chantilly. At stake was the survival of an entire Union army, or of Jackson's isolated Confederates.