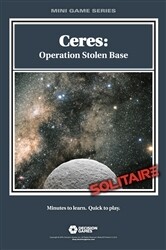 Ceres: Operation Stolen Base is a solitaire game depicting the actions of an elite Rebel task force attempting to seize the largest source of water in the Solar System shortly after the outbreak of the Free Mars Revolution. Your task force must defeat the Earth Federation ships in the area and seize the primary surface base. Four increasingly difficult missions must be completed to win the campaign game. Along the way, additional ships arrive and pods are constructed to increase strength and technological capabilities. A unique card system counts down the time remaining and provides challenges and opportunities at every orbit.

In this game the player takes command of a Rebel task force attempting to complete missions critical to securing the Ceres water base. Your success will ensure Mars and other colonies have a major source of water for survival and the Earth Federation will be forced to haul water up the deep and costly gravity well from Earth.