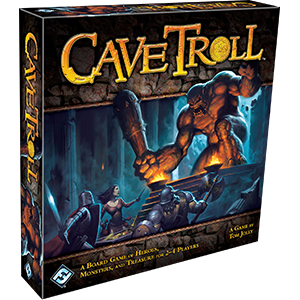 FFG-TJ10
$31.95
In stock
1
Product Details
UPC: 9781633441354
Publisher: Fantasy Flight Games
Players: 2-4
Age: 14+
Time: 20-60 minutes
Made In: China
Designer(s): Tom Jolly
Gather your forces of heroes and monsters and prepare to enter the dungeon in Cave Troll, a classic board game of strategic positioning for two to four players. In every game, you'll bring your heroes and monsters into a labyrinth in a race to grab as much gold as possible, by any means possible. Your heroes allow you to establish dominion over certain rooms in the dungeon, while your monsters disrupt your opponent's plans and slay his heroes.
Every game of Cave Troll puts you in a tense situation as you spend your limited actions to achieve the greatest possible advantage. Your heroes and monsters offer special abilities that you must use to stay ahead of your opponents. A powerful artifact could turn the tide of the game in your favor. By deploying your heroes and monsters wisely, you'll gather more gold than your opponents and claim victory!