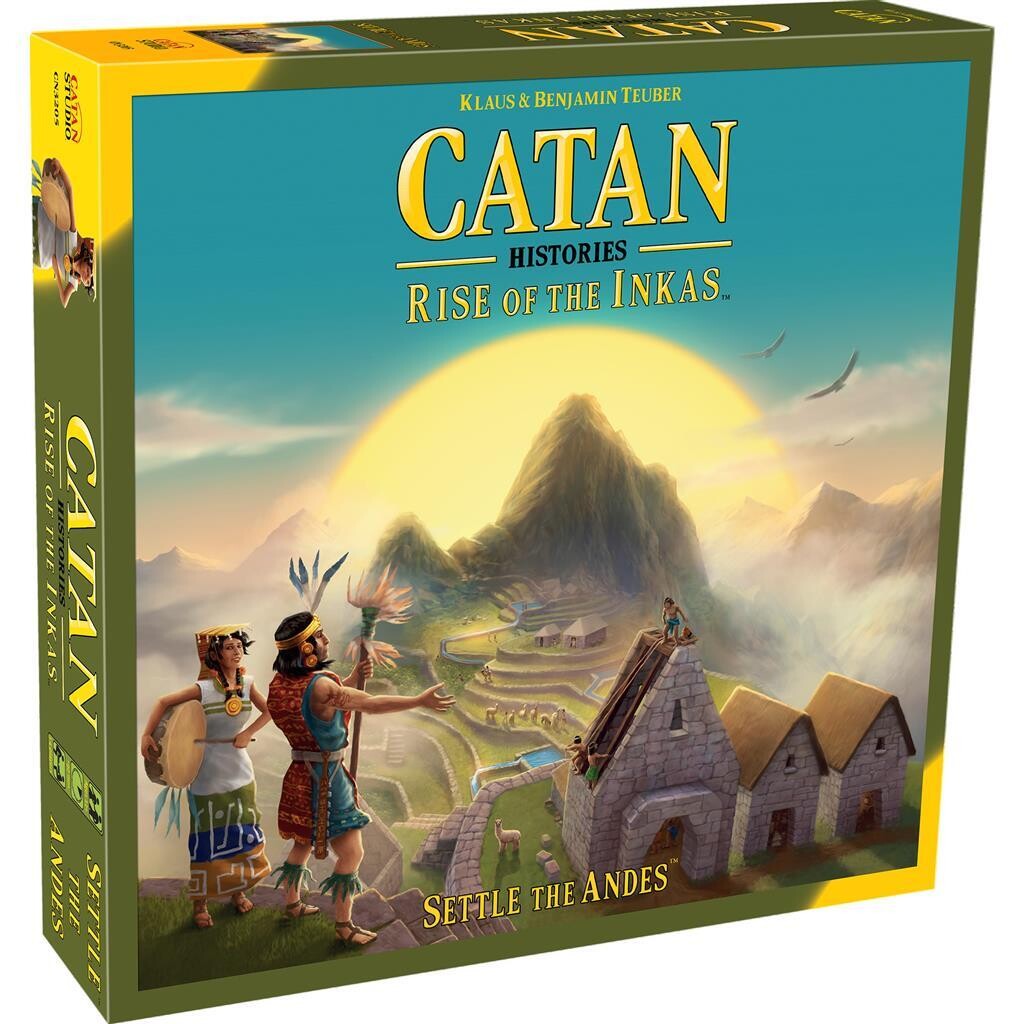 Catan Histories: Rise of the Inkas

Long before the Inkan (aka "Incan") Empire rose to dominance in Peru, many advanced indigenous cultures developed and declined in the Andean regions of South America. The Wari constructed centers of urban commerce, complete with sophisticated trade routes between cities. The Tiwanaku developed advanced agrarian practices and were accomplished shepherds of alpacas and llamas. The Lambayeque were master craftsman well known for their intricate work with gold and silver. These and many other historic peoples led to the eventual rise of the Inkan Empire, which dominated the region for a hundred years.

CATAN - Rise of the Inkas confronts you with new strategic challenges as you develop your tribe. Development works in much the same as the core mechanics of CATAN: build roads and settlements, gain development cards to give you an advantage, and utilize the robber to hinder your opponents. However, eventually your early tribes reach their pinnacle and are supplanted.

As you play Rise of the Inkas, you must twice decline your early tribes to make way for a new tribe's era. You remove all your constructed roads from the board and cover your settlements with thickets to denote that these may no longer be developed. But your game doesn't end there. When your tribe goes into decline, you place a new settlement on an available board space and continue the game using this new settlement.

Your tribe's settlements in decline can no longer develop into cities, and you cannot build roads from them. They may even be replaced by your opponents' tribes! However, as long as they remain on the board, your previous culture's settlements and cities continue to provide you with resources. Once you establish your third tribe, you are in the end game. You win by being the first to fully develop this tribe and usher in the rise of the Inkan Empire.

The strategic choices you face in CATAN are even more nuanced in Rise of the Inkas. As you approach the pinnacle of a tribe's development, your opponents look for ways to take advantage of your settlements in decline and try to take the best locations for their own! Deciding when to advance your tribe is something that you must carefully consider, for simply rushing to advance can put you in a compromised position as the resources you relied on can be claimed by your opponents.

Many familiar CATAN rules are slightly altered to create a fresh CATAN experience. These include the Longest Trade Road and Mightiest Combat Arts. These objectives no longer grant simple victory points but instead offer a gameplay advantage. Each player may trade with the supply at a standard rate of 3:1. Additional commodities produced by the sea and jungle areas allow for additional access to needed resources via a set-collection trade method that is new to CATAN.