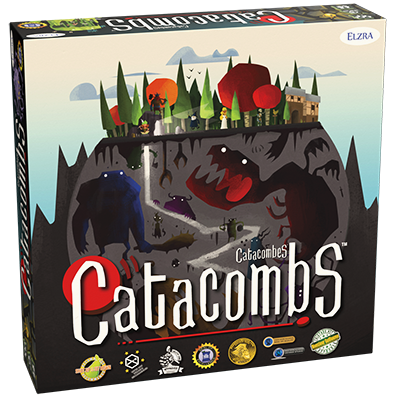 Catacombs is a unique tabletop fantasy experience where players skillfully flick wooden discs representing heroes, monsters, fireballs and more. Up to four players control a party of heroes who cooperatively use spells and abilities to defeat the monsters and eventually the Catacomb Lord. Players capture gold coins from fallen monsters and then use them to upgrade their heroes by buying items at the Merchant, restoring health at the Healer or trying their luck in the Tavern.

The game is designed for quick setup and fast play.

No two heroes are the same - each has unique shots and abilities which must be used strategically.

The Wizard, for instance, has his choice of spells from ranged magic attacks to defensive teleportation. Or the Barbarian, with his devastating Berserker Battle Axe that allows him to ravage multiple enemies in one turn.

Take On the Dreaded Catacomb Lord

One player plays as the Catacomb Lord, whom all other players must face. The Catacomb Lord has dozens of monsters at their command, and should not be underestimated.

There are four Catacomb Lords to choose from in the base game, each with their own challenge.

Explore The World Of Catacombs

Every game of Catacombs is different. With over 30 different rooms, there are thousands of combinations. The heroes must make their way through the challenge set out by the Overseer, battling monsters and collecting coins.

Some rooms are special - such as the Merchant, where the heroes can spend their hard earned coins on new items.

Included in Catacombs are dozens of different shots types - from ranged and melee attacks, to poison effects and healing powers.

Put your dexterity skills to the test by banking discs off obstacles and target multiple enemies in one devastating attack!