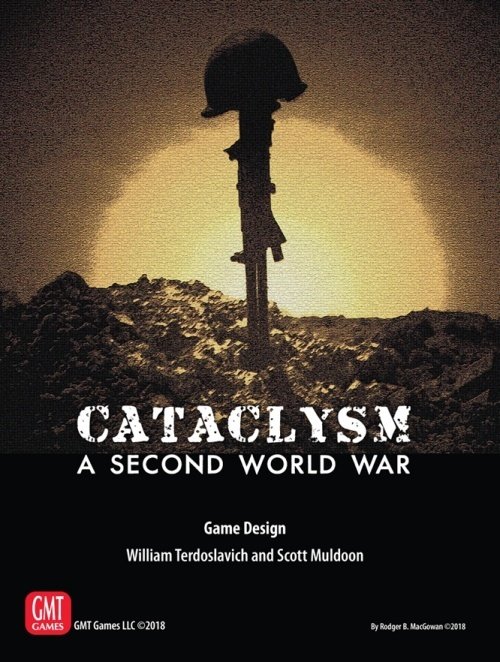 Cataclysm: A Second World War is a quick-playing game about politics and war in the 1930s and 40s, designed for two to five players. The three primary ideologies of the time contend to impose their vision of order on the world. The Fascists (Germany, Italy, and Japan) seek to overthrow the status quo, which favors the Democracies (France, the United Kingdom, and the United States), while the Communists (the Soviet Union) look for opportunities to storm the global stage.

Not Your Father’s Panzer Pusher

Cataclysm is unapologetically a game of grand strategy. Military pieces have no factors or ratings. The capability of your forces increases as you shift the commitment of your economy from civilian to military production. Land, air, and naval forces all have their role in prosecuting war. There is no Combat Results Table; instead, battles are resolved by opposed die rolls with a limited number of modifiers capturing the most important operational effects. The area map emphasizes political boundaries, drawing attention to strategically critical territory, encouraging players to think in broad terms of resource acquisition, control of border states, and the perception of power as the arms race plays out.

Geopolitics and the Clever Use of Flags

Flags are the currency of political capital in Cataclysm. Nations earn flags through public mandate or provocation by opposing powers. Spending this political capital is subject to the effectiveness of your power, which determines how easily you can implement your policies. Readying for war requires you to increase your commitment, straining the stability of your government. You can offset this by using propaganda to shore up your position. You can form strong alliances with friendly powers, or use diplomacy to sway your neighbors to your side. You may need to pressure reluctant partners into taking action. Manage your political actions to suit your goals, but be wary of provoking your opponents, allowing them to earn flags in reaction.

A Continuous Flow of Action

There is no sequence of play. Instead, Cataclysm relies upon a strategic chit pull system that randomizes the order of not only your actions, but also the appearance of newly built combat units. This creates riveting tension that keeps players involved at all times. Random crisis events will upset plans, as well as signal the approach of the end of the turn. Not all is governed by luck. Players can use their reserve to carefully time important moves. Each side faces unique challenges managing its political, military, and economic resources in the face of constant uncertainty. Without long-term planning, any crisis can turn into chaos.

The full game of Cataclysm covers the entire globe and runs from 1933 to 1950. The extensive playbook includes several additional scenarios allowing for a range of theatres and start points. Special rules account for Appeasement, the Chinese Civil War, Lend Lease, the Atomic Bomb, the Great Purge, Dreadnought Refits, etc. Great care has been taken to allow a different but plausible alternate history to unfold with every play.

Complexity: Game processes are generally simple, but novel even for experienced game players.

Solitaire Suitability: There are no hidden elements to hinder solitaire play, but no solitaire-specific rules.