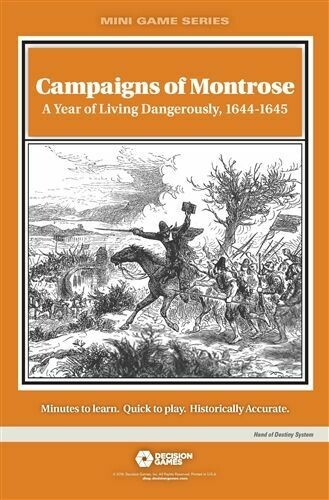 This is a two-player game. It depicts James Graham, the Marquis of Montrose, and his legendary string of victories over the Scottish Covenanter government during the First English Civil War (1642-1646), that would later go down in a crushing defeat. The Royalist player must recruit a Highland army and either replicate Montrose’s victories or march into England. The Covenanter player must overcome factional infighting to defeat Montrose. Both sides must manage the tendency of conscripted units to disband after every defeat or victory.

The game uses a modification of the Hand of Destiny series rules. Each player has a unique set of campaign cards generating historical events such as defection, plague, and the terrifying Highland charge, all of which affect recruitment, movement, and combat. Combat is resolved using a quasi-tactical procedure in which units take turns attacking one another.