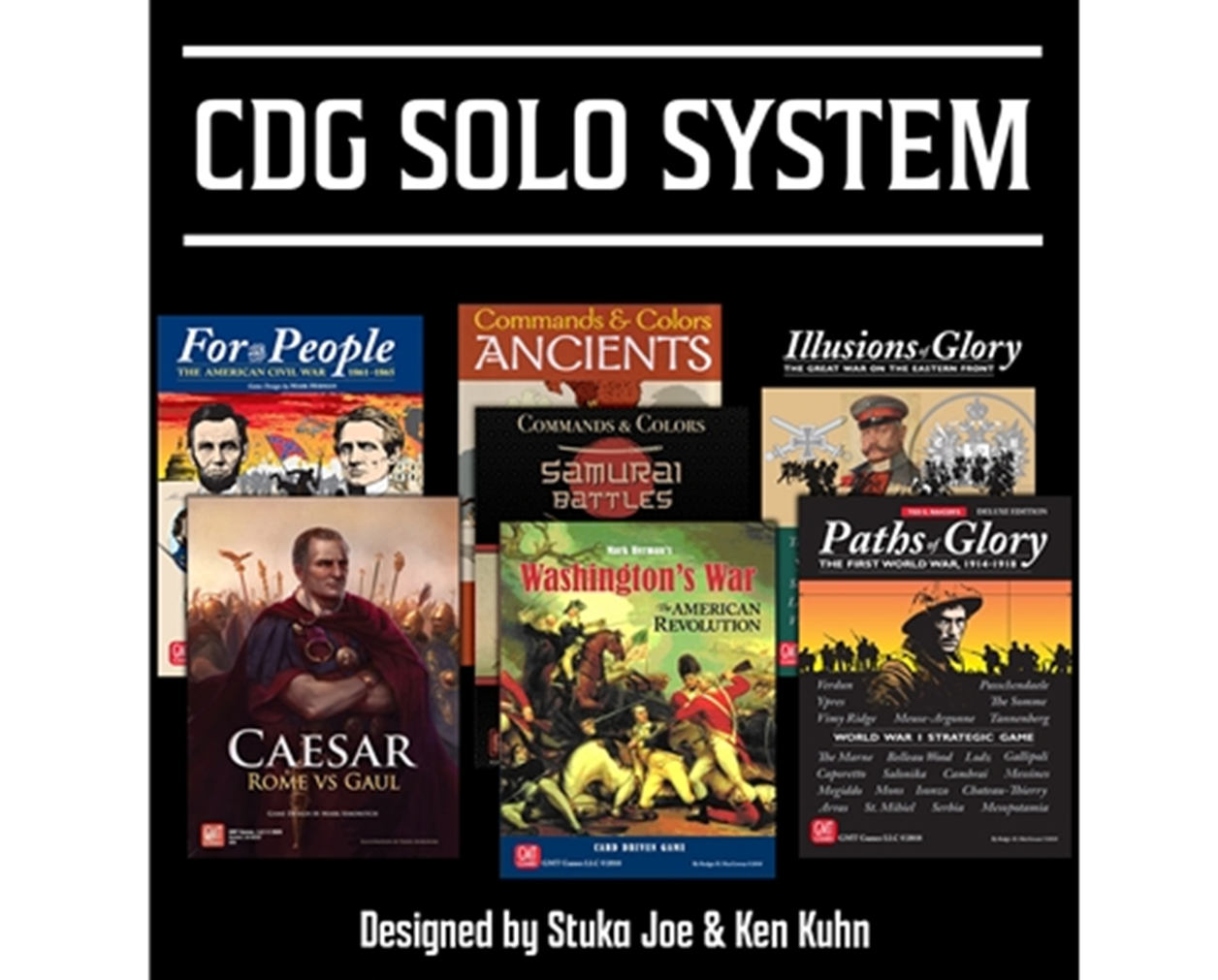 “Is there a more meaningful, entertaining and mentally healthy way of playing these games solo than the “dunce cap tango”? Is there a way to play CDGs in solitaire mode where the player will experience the story developing as they play along, while occasionally being surprised by unexpected events and forced to react to developing and changing situations, all while being unaware of all of the other side’s cards whenever playing one side? This is what the CDG Solo Method is all about.” - Stuka Joe, The Madness Behind a CDG Solo Method, Inside GMT, 2016

The CDG Solo System is a revised GMT Edition of Stuka Joe's CDG solo method, which streamlines two-handed solitaire gameplay by decreasing turn to turn overhead and maintenance. This method of play increases narrative immersion as the great battles of history unfold on your tabletop. The GMT edition of the CDG Solo System includes professionally printed components, a custom screen-printed die, an official ruleset, and Playsheets for seven of GMT’s most popular Card Driven Games.

The CDG Solo System plays alongside your favorite CDG and is designed to enhance your solitaire experience by reintroducing many of the best parts of wargaming that fall apart in standard two-handed play, namely, as Stuka Joe mentioned above, the narrative flow and the fog of war.

The CDG Solo System includes two Card Displays that are used to manage each side’s hand of strategy cards. At the beginning of each Side's turn, you will roll a Fate Die to determine which of the cards in one or more of the slots are available for play. Typically 2 or 3 cards are available at a time, but the final decision is ultimately yours. After a card is played, the marker on the Cards Remaining track slides one spot to the left, and then it’s time to roll the die for the other side’s turn.

Because the turn to turn maintenance level is so low, the rhythm of play quickly becomes second nature and allows for the game to shine. The combination play between the roll of the Fate Die and the layout of the Card Displays provides many great benefits for Solitaire CDG players. First, the singular die roll provides a nearly instantaneous result that limits the player’s options so a decision can be made quickly for each side.

Second, because cards are only turned face-up when their lettered slot is rolled, the player doesn’t know all of the cards that will be available for each side. This combined with the Fate Die dictating which slots are available each turn effectively reinstates a reasonable degree of uncertainty and allows the player to focus on the options for the active side, instead of falling victim to the mental strain of trying to take every card into consideration while also pretending to not know what the other side is planning to do.

Finally, the system allows for an element of surprise. Every once in a while, the perfect strategy hangs in the balance as the die rolls. Whether things look grim (until the die roll flips the perfect card) or everything feels like it's falling perfectly in line (until the card slot you need isn't rolled), the CDG Solo System reintroduces the fog of war to solitaire CDG wargaming. The moments that don't go as planned make for the best stories.

Along with a Rules Summary and the components we’ve talked about above, the system will launch with official Playsheet support for seven GMT games:

Playsheets are single sheets of rules, front and back, that contain all of the game-specific rules needed to use the system. These include a diagram of set-up, a listing of die result rulings, and modifications to the system that are necessary to meet the demands of unique game rules.

For those who are familiar with Stuka Joe’s original solo method, the Playsheets are based on the original “Tweak Sheets” and provide the same ease, simplicity, and clarity while aiding in the play experience. While the CDG Solo System is launching with support for the above-mentioned titles, the development team will continue to build more official Playsheets to support old and new CDGs in the GMT catalog.