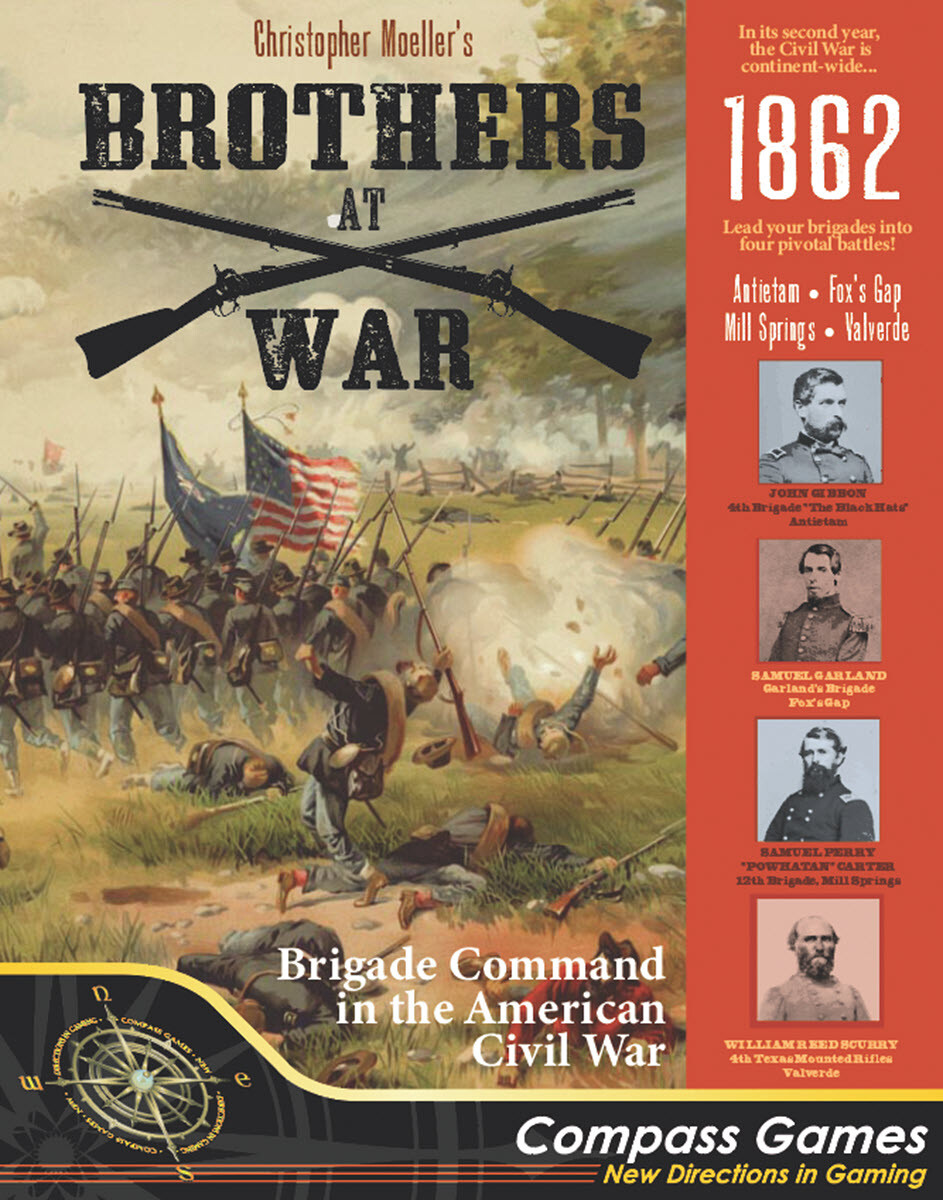 Brothers at War: 1862 is a quick-playing, tactical wargame exploring civil war brigade command. Units are regiments, batteries and companies of skirmishers. This is a quadrigame or set of four games, each featuring a full-size, 22×34″ game map and covering battles from 1862: Antietam, South Mountain, Mill Springs, and Bloody Valverde.

Here Come the Rebels! It is a crisis year for the nation, as Invading armies march into Maryland, West Virginia and New Mexico.

Command rules are simple and abstracted. There are no combat results tables. Combat and all checks are resolved using six-sided dice, in which results of 5-6 mark success, and 1-4 failure. Brigades activate via chit pull, with their constituent units moving and fighting individually. Stacking is limited to two units per hex. Massive 1.5” hexes allow two 3/4” units to fit side by side… no information is obscured!

Distinctions are made between formed and unformed infantry, deployed and limbered artillery, mounted and dismounted cavalry. Unit facing is not an element of play. Instead, unit deployment in adjacent hexes can trigger pass-through fire, which simulates flanking fire, or fire on compressed lines (both dangerous situations for civil war units).

Battle Cards introduce an element of uncertainty and excitement to play. Unique off-map displays track every brigade’s reserves and casualties. Once a unit’s reserves are used up, it becomes exhausted and liable to break.

Four battles explore how the system can accommodate a variety of civil war battlefields: The meat-grinder of Antietam’s cornfield, in which brigades collide one after another in a brutally confined area, the mountainous terrain of Fox’s Gap, where a Union corps attempts to break through a handful of southern brigades; the sodden fields of Mill Springs, Kentucky, in which green rebels with old-style muskets battle freezing rain as well as their northern enemy; and an all-cavalry Texan brigade confronting union regulars and green New Mexican volunteers at Valverde in the distant western territories.

The four battles covered, each with its own full size map, include: