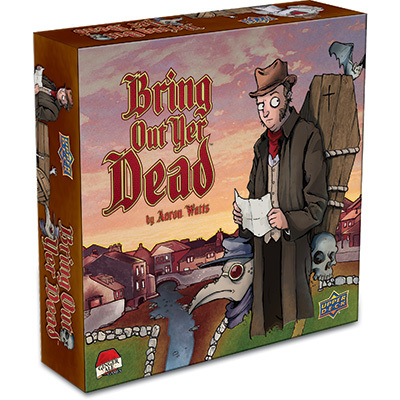 The Game of Morbid Family Fun!

Bring Out Yer Dead is set in the Victorian era and revolves around families competing for the best grave plots for their dearly departed. Small wooden coffin tokens are used for game pieces and French Tarot-style playing cards feature characters such as the grave digger, the grave robber, the fortune teller and the plague doctor.

As the potential new head of the family, you must earn as much influence and riches as you possibly can to solidify your place in the family and in town. Influence is earned by vying to get the “dying” members of your family into the most desirable grave plots available. Players use their cards to bid to get bodies on the Grave Digger's cart; switch graves; move opponent’s bodies to less desirable grave plots; dump bodies in the river; rescue bodies from the river; or even do a little grave robbing of their own.

At the beginning of each round, the first player gets to affect gameplay by selecting which side of the cemetery to bury the bodies. Players then bid to get bodies on the Grave Digger's cart by playing three cards from their hand (made up of a core set of cards, plus additional cards that players earn through game play). Once all players have played their cards, coffins are placed on the cart and buried in grave plots in the same order they were placed on the cart. Grave plots are given values based on the amount of influence points they are worth, which will be scored and tallied at the end of the game. Players can use their cards to switch graves, move opponent’s bodies to less desirable grave plots, dump bodies in the river, rescue bodies from the river, and even do a little grave robbing of their own.

Each day (each game round), the Grave Digger brings his cart around town to pick up the day's dearly departed. The Grave Digger prefers not to overload his cart, so if you have dead family member that doesn't make it on the cart before it’s full, the lazy Grave Digger will dump your beloved in the river – never bothering to bury them at all! No one wants their family members dumped off the cart, let alone floating down the river (earning you negative points)! To keep your family reputation intact and to bury the bodies where they deserve to be buried, you may have to resort to some early morning grave robbing and body snatching of your own! But watch out, you won't be the only one playing those dirty tricks!