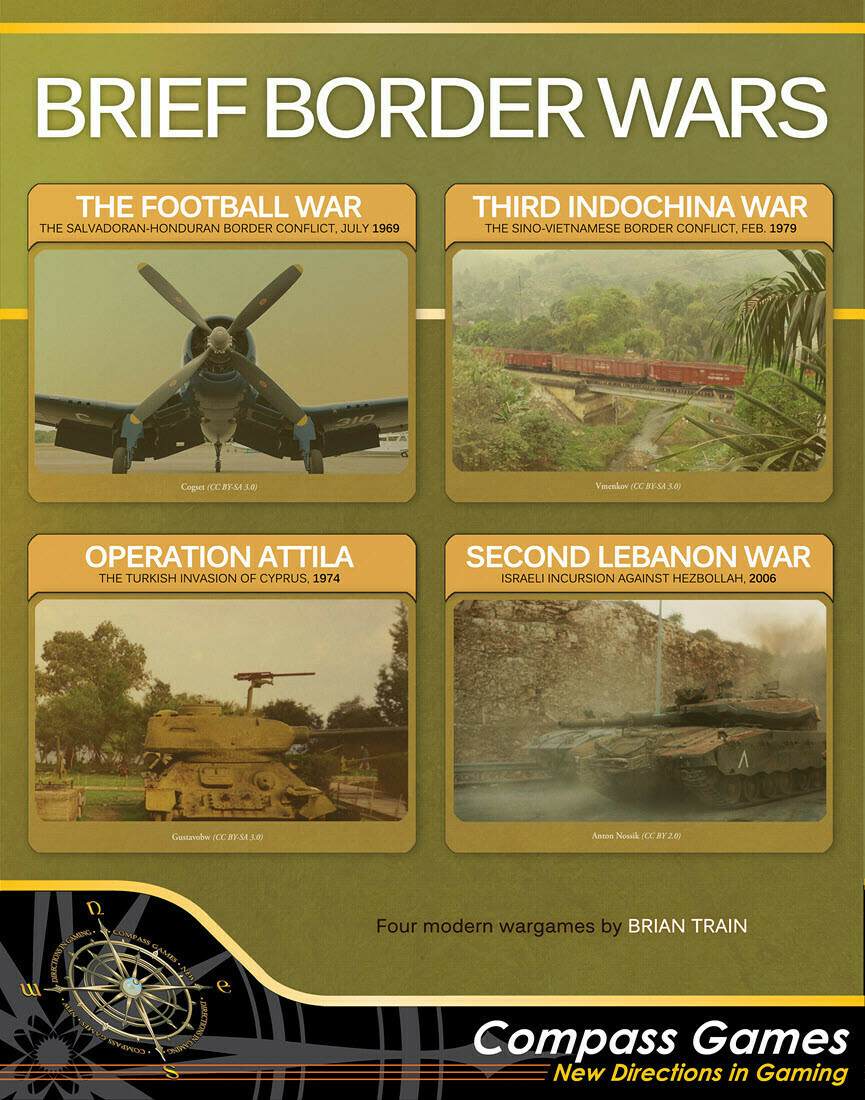 Brief Border Wars is a quadrigame or set of four mini-games on short border conflicts of the 20th and 21st century, using a card-driven system that models the chaotic, stop-and-start nature of these impromptu wars.

The four conflicts include:

El Salvador vs. Honduras, 1969. This is one of history's shortest wars, clocking in at about 100 hours. People often joke that this was was provoked by one side losing a soccer match: in fact, like most wars, the war was the climax of years of political and economic pressure. The El Salvadoran government reasoned that a war with Honduras would unify the country politically by seeming to avenge the mistreatment of the hundreds of thousands of El Salvadoran immigrants in Honduras and diverting citizens’ attention from other problems. The war, while short, did not provide a solution to anything: about 2,000 people, mostly Honduran civilians, were killed; no land changed hands; infrastructure in both countries was damaged; both countries spent scarce money rebuilding their forces; and economic ties between the two countries were disrupted completely. In the game, both forces are largely similar - El Salvador has a slightly larger ground force, while Honduras has a bit more airpower - and both must contend with rugged terrain and poor roads in their efforts to seize or hold Honduran territory.

The Turkish invasion of Cyprus, 1974. Greeks and Turks have co-existed uneasily on the island of Cyprus since Classical times. In 1974a coup d’etat by "EOKA-B", a violent organization seeking unity with Greece, overthrew the Cypriot government and was the trigger for the Turkish military to intervene on the island, ostensibly to guarantee the safety of Turkish Cypriots living in small enclaves across the island. The invasion, codenamed Operation ATTILA, saw two distinct bursts of action: first, on 20-23 July when Turkish forces established a beachhead then drove a narrow corridor to the capital of Nicosia; and second, when peace talks and world opinion seemed to be swinging against Turkey, a second invasion on 14 August which ended several days later with Turkish control of about 40% of Cyprus. In the game, the Turkish player has a small number of professional units to seize and dominate as much of the island as possible, opposed by a larger number of Cypriot irregular forces.

China vs. Vietnam, 1979. The Chinese government claimed that this brief war, purposely limited in its aims, was launched to “teach Vietnam a lesson”… officially to punish it for its poor treatment of ethnic Chinese in Vietnam, its occupation of the Spratly Islands, and its invasion of Cambodia at the end of 1978. The real incentives behind this first war between two Communist countries were rather more obscure and remain so to this day. The conduct of the war exposed many severe problems of the Chinese People’s Liberation Army, which had not fought a war for 30 years. The Army performed very poorly against the determined Vietnamese People’s Army, then one of the largest and most battle-experienced military forces in the world, backed up with a large force of determined local militia and guerrillas.

Particularly galling for the Chinese player is having to contend with two widely separated, non-communicating battle fronts.

Israel vs. Hezbollah, southern Lebanon, 2006. The Hezbollah (Party of God) movement is effectively the governing power in southern Lebanon, bordering on the state of Israel. The Second Lebanon War began in July, 2006 after a long series of provocations and retaliations between the two powers: the action begins around July 20, 2006 which marked the beginning of increasingly large incursions by Israeli ground troops after eight days of intense aerial bombardment. The time covered by an entire game may represent up to three weeks, ending in a ceasefire on August 14, 2006. The Israeli player's main objective is to seek out and destroy the Hezbollah rocket and missile units raining destruction on their territory, while balancing the need to avoid mobilizing too many reserve forces.

Each game is small (40 to 50 counters each) and short (one to two hours), using a common set of basic system rules and a deck of special cards to control movement and combat. Each game also features rules additions and variations to reflect the nature of each conflict.

These games are ideal short matches to finish off an evening of gaming, or fill a lunch hour. Either way your sense of improvisation will be challenged, and you'll explore four of the interesting yet obscure small wars of the last 50 years.