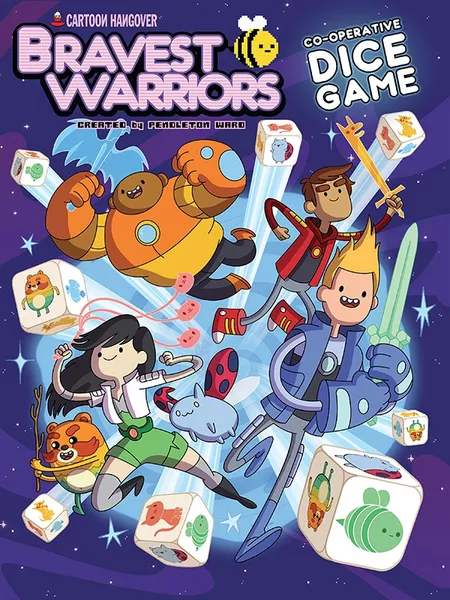 In the year 3085, four teenage heroes-for-hire and their pals warp through the universe to save adorable aliens and their worlds. When evil gets all fancy, they break that biz down...for hope!

In the Bravest Warriors Co-operative Dice Game, you take on the role of one of the Bravest Warriors or one of their best pals. Working together, you'll try to overcome Events and Encounters seen in Bravest Warriors episodes using your Portals and Special Abilities. Encounters require various symbols to beat them, and those symbols are found on the twelve custom dice, which are divided up between the players as evenly as possible. Each player rolls her own dice, but once rolled the dice are pooled together to use them as best you can as a team. If you don't roll what you need, you can play Portal cards (as seen in the "Sugarbellies" episode of the show) or use your character's Special Abilities. Conversion Portals, Re-Roll Portals, Gift Portals and more can make the difference between success and failure.