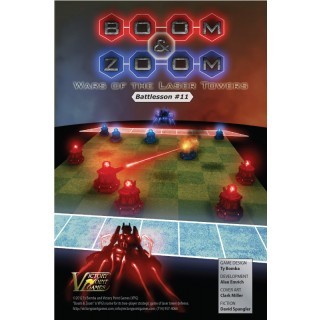 Opening,” said the technician before Tommy could respond, and the great iron door into the Tower Wars Arena opened.

Raising his hands above his head, a smile on his face, Tommy Taggert stepped out into a wall of noise as thousands of fans began chanting his name. Ahead of him was the row of laser towers that were his weapons and on the other side were those of his opponent, gleaming in the spotlights. He stepped forward, walking confidently towards his VR Station from which he would control the towers that were his means to victory.

But as he raised the virtual reality helmet to put on his head, a moment of doubt crossed his mind. He had been studying Lee’s style for months, preparing himself for this match. If the Pan Asian champion had been removed, then now he was facing the unknown. Who was his new opponent? How good would he be?

He shrugged as he snapped the helmet into place. He’d soon find out. Right now, it was time to Boom and Zoom.

Boom & Zoom by designer Ty Bomba is a two-player strategy game about the “wars of the future” where Laser Tower vehicles conduct fire and movement across the battlefield. This game abstracts warfare in much the same way as Checkers or Chess, with similarly deep gameplay. Quick to learn, but difficult to master, can you outmaneuver your opponent and claim the victory for your side?

In this BattLessonTM game, players receive stackable pieces (the "Towers"), set up on a Chess-like board. With a variety of different missions to choose from, command and control your Towers as they Zoom (move) and Boom (fire at other Towers) their way to the other side of the board to score. With treacherous terrain, Tower tactics, and more to add onto your game, can you push your way past every obstacle? Get onto the field with Boom & Zoom!