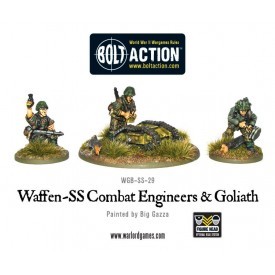 Representing the classic image of the German infantryman during World War II, these The Goliath was used by the German engineer units in a variety of roles. It was essentially a radio contolled tracked bomb, carrying a big charge of high explosives direct to where it was needed, commonly a pillbox, minefield or disabled enemy tank. The controller steered the robot tank by using a wire connected to a simple contol box.

The Goliath was fairly successful and used on many fronts,and though slow and vulnerable to small arms fire it would be a frightening sight as it waddled towards you with its deadly payload!