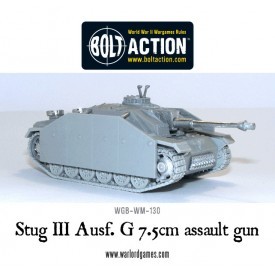 The Sturmgeschutz assault gun was based on the Panzer III Chassis. It saw service at the start of the war. Throughout the war it was up-armed and up-gunned and became the standard German Army Assault Gun. It fought on all battlegrounds and fronts.

By the end of the War it had confirmed itself as the principle tank killer of the German army. There were a few variants produced, this is the deadly 75mm cannon.