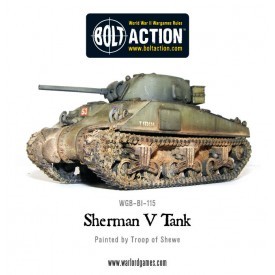 The most populous British Tank, the only downside to which was a high silhouette but made up by its reliablilty and ruggedness. It was armed with a 75mm gun and two .30 cal Machine Guns.

It was supplied to Britain under the Lend-Lease programme by the Americans.