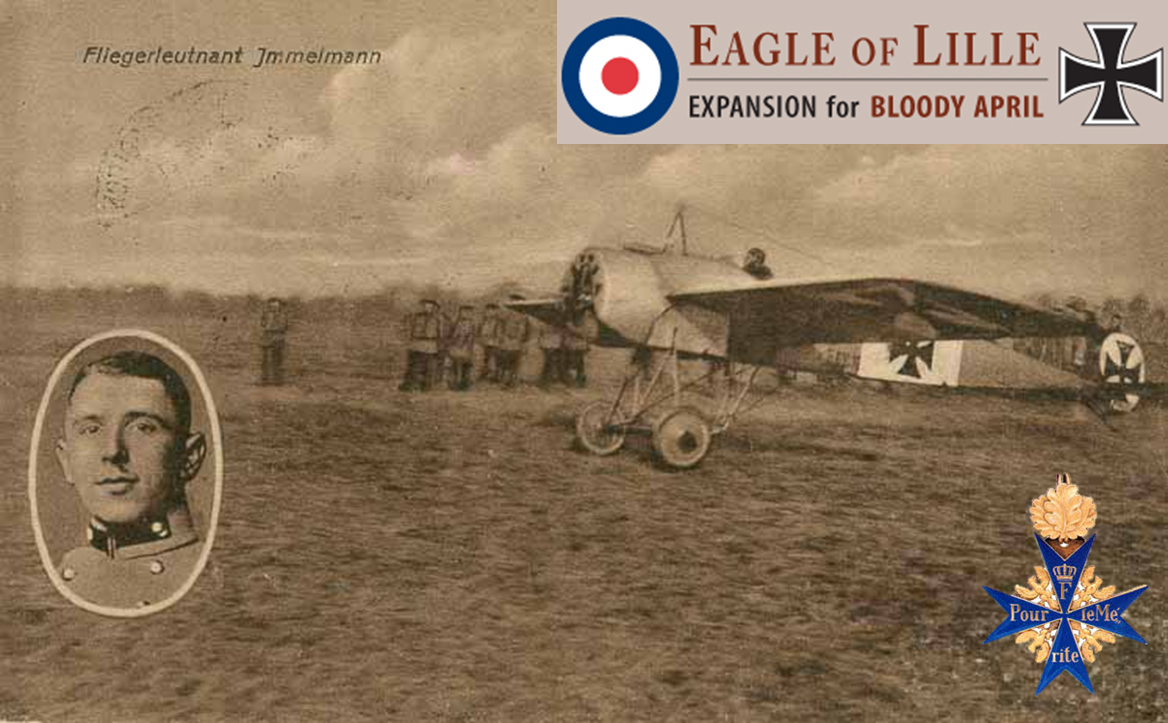 1 August 1915, Max Immelmann of Germany scored his first kill while flying a Fokker Eindecker. By 12 January 1916, the “Eagle of Lille”(as Immelmann was nicknamed) was awarded Germany’s highest award the coveted Pour Le Mérite or as it was commonly known “The Blue Max”.

The Eagle of Lille expansion to Bloody April (Air War over Arras France 1917) expands the air war to follow the career of Immelmann and some of the other early aces such as Oswald Boelcke and Lanoe Hawker. Seven new scenarios cover the period from August 1915 to early 1917 while including tables which randomize taskings and add replayability to the scenarios. 14 new Aircraft Data Cards are in this expansion. They include German single seat scout aeroplanes; Fokker Eindecker E.1, Eindecker E.II/E.III and Fokker D.III. German two-seater aeroplanes; Albatros C.I / C.III and LVG C.II as well as flying battle plane the AEG G.II with a crew of four. The British get a bevy of new aeroplanes; Bristol Scout C, B.E.12, RE.7 and Vickers FB5 Gun Bus as well as French made Morane-Saulnier N, L and BB.

A new 8”x11” map extension adds the off-map aerodrome of Treizennes as a now playable area to fly. New Advanced rules for Bloody April such as Aeroplane Quick Turn and new rules for Eagle of Lille have been added. Two new counter sheets of aeroplanes and informational markers are included to round out this folio expansion. Take to the skies over France like never before and relive the battles that started air warfare as we know it today.
Ownership of Bloody April is required to play this expansion.