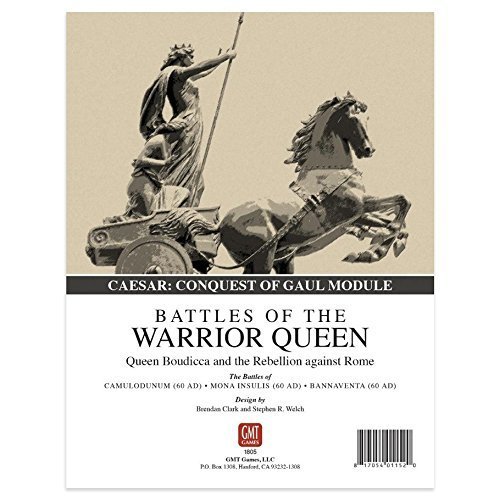 Battles of the Warrior Queen: Queen Boudicca and the Rebellion against Rome

A GBoH Module for Caesar: Conquest of Gaul

It is AD60, and Governor of Britannia C. Suetonius Paulinus stands ready to deal his final blow against a vicious insurgency in Rome’s new province. Inspired by Rome’s implacable opponents, the Druids, the remaining fanatical warriors of a two-year insurgency hold out on the island of Anglesey. Having made an amphibious landing on the island’s shores, Paulinus and his legionaries must cut their way through fierce opposition on the beach.

While his cohorts ravage the island, a messenger reaches Paulinus with news of a tribe that is rampaging the eastern fringes of his province. The Iceni, led by Queen Boudicca, are reported to have murdered local Roman officials and their guards. Other reports soon arrive that the Iceni’s revolt is gathering both force and momentum as local tribes are responding to Boudicca’s call for open revolt. A large warrior force is said to be devastating Roman villas and farmsteads as it heads south towards the first Roman colony in Britannia, Camulodunum.

Paulinus realizes that with all four of his legions posted in the north and west, this new menace has the potential to ravage Roman colonies and cut his lines of communication. He faces the very real prospect of being Governor of Britannia in name only.

Battles of the Warrior Queen covers the major engagements during the rebellion of the Iceni tribe and Boudicca’s allies against the legions of Emperor Nero. Led by Queen Boudicca, the rebellion would be the greatest British threat to nearly four centuries of Roman domination of Britain.

Separated from mainland Britain by the treacherous waters of the Menai Straits, Paulinus faced the challenge of making an opposed beach landing on the Welsh island of Mona Insulis (today’s Anglesey). The Britons, arrayed along the shore in a dense and heavily armed line of battle, awaited the assault. Helping whip them into a battle frenzy were the Druid priests, for whom the island was their last sanctuary.

On learning that the Iceni tribe had risen in revolt and were heading towards the Roman colony of Camulodunum (modern-day Colchester), the IXth Legion (named as “Hispana”) set off from its base in Lindum (modern-day Lincoln), under the command of legate Petillius Cerialis. Cerialis was a mercurial individual who had escaped the brink of military disaster before. His luck would be tried once again in his encounter with the Britons.

After arriving on the mainland, Paulinus rode east and south in great haste. Outside Londinium news of the defeat of Cerialis and his IXth Legion reached him. Ordering evacuation of the city, Paulinus withdrew hurriedly northwards to the midlands and urgently concentrated the XIVth Gemina and the XXth Legions.

As Boudicca’s horde approached, Paulinus drew up his troops in close order in a defile, protected on his flanks and in his rear by dense forest. He new that the Queen of the Iceni would struggle to keep her disparate coalition in check for long, and would soon be compelled to attack. Whichever way it went, this would likely be the final, climatic battle of Boudicca’s rebellion against Rome.

To play this module you will need the maps, counters and rules that come with this module and the rules and some counters from Caesar, Conquest of Gaul. Battles of the Warrior Queen can also be played with the Simple Great Battles of History (SGBoH) rules.