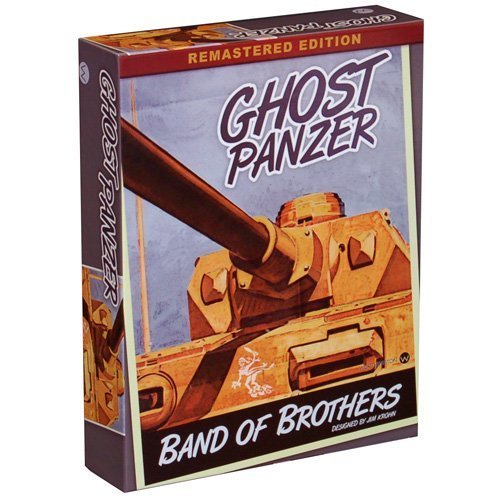 Band of Brothers: Ghost Panzer is a fast playing game of squad level combat in WWII. It covers the exploits of the German 11th Panzer Division in Russia from 1941 to 1943. The rules are very simple with very few exceptions to remember and yet the game is meant to be all encompassing and will include infantry, tanks, and artillery.

Based on years of research, the game system uses a unique suppression mechanic. There are no longer two unique states for a unit, but varying degrees of suppression. This allows suppression to accumulate from multiple fire sources and means that the unit will not take a morale check until it is asked to do something. You will never know for sure how your units will respond until they are needed.

Although casualties can be caused by artillery and heavy weapons (which makes them prime battlefield targets), squads will never cause significant casualties shooting at range at dug in, first line troops. Their goal is to fire and maneuver. Sections of the enemy force must be pinned down and eliminated from up close. The system itself forces this realistic play. In a similar fashion, the system rewards you for spreading your troops out and other realistic game play.

Another unique feature of the game is its use of Proficiency and Casualty ratings to differentiate squads in areas besides just morale.

Ghost Panzer is a STAND ALONE GAME, but is also the second in a series.

A stronger and larger box. All of the maps have the new remastered artwork and are mounted. An up-to-date series rule book. Full counter sheets – include extra counters. An improved, graphical player aid card. All known errata is incorporated in the new edition.