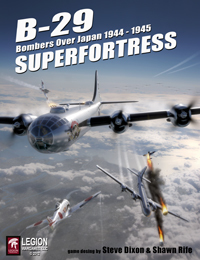 B-29 Superfortress is a solitaire game featuring the technologically most advanced bomber of the Second World War - the B-29 - flying as part of the Twentieth Air Force from the Marianas Islands against targets in and around Japan in late 1944 and 1945. The game puts you in the cockpit of a B-29 Superfortress as you fly your missions over Japan. Your goal: sucessfully complete a tour of 35 missions and return home a hero for bringing the war with Japan to a close without a bloody hard-fought invasion of the homeland.

Your missions will be varied: high level, low level, day and night. You will face fighter attacks, flak, searchlight spotting, and bad weather; not to mention damage to your aircraft to include a shattered windshiled and compromised cabin pressure, loss of oxygen supply, damaged landing gear, knocked out navigation or communication equipment, ruptured fuel tanks, inoperable machine gun armament, and just about anything else that can go wrong with a 100 ton aircraft flying 1,500 miles to it's target only to be met with fierce resistance from a determined enemy.