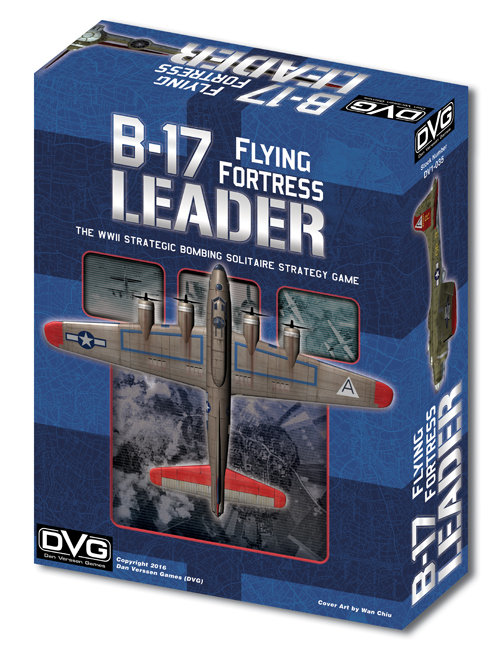 You select and command Bomber Groups and Fighter Groups belonging to the US 8th Air Force as you carry out a strategic bombing campaign against German Occupied Europe.

As you plan and carry out your missions, the game's AI controls the German Air Defenses, Technology improvements, and allocation of resources to the European, Mediterranean, and Russian campaigns.

B-17 is a Dean Brown design. He has worked closely with us to make sure B-17 is faithful to the Air Leader series, while at the same time having its own unique flavor!

You begin by selecting a Campaign sheet. Each Campaign details the year of your aerial campaign, point values of different types, objective, and special rules that make the campaign unique.

It is then time to set-up the initial German resources and air defenses that you will be flying through.

During each Mission, you select which Target card you wish to attack, plot a flight path to and from the target based on what you think the best path through the defenses is, and then resolve the Mission.

During the Mission, you'll move your Bomber Formation and Fighter Escorts one leg of the flight at a time to the target, checking to see if you encounter German fighters, "Bandits", and resolving the air engagements along the way.

During these battles, your Escorts will do their best to shield your Bombers from the swarming Bandits, but some might slip through. At which point it will be up to your gunners to destroy the incoming fighters, or at least driving them off.

While at the same time, the Bandits will be doing their best to shoot down your Bombers.

As you approach the Target, you'll lead your Bombers through deadly fields of flak guns before being able to drop your bombs.

Once over target, you'll call out "Bombs Away!" as you rain destruction down on the factories below!

It is then time for the long flight home. Hopefully, the enemy fighters will not have had enough time to land, rearm, and take off again to intercept you on your home-bound journey.

It is up to you to inflict maximum damage on Germany's war-making capability, while at the same time bringing your brave crews home.