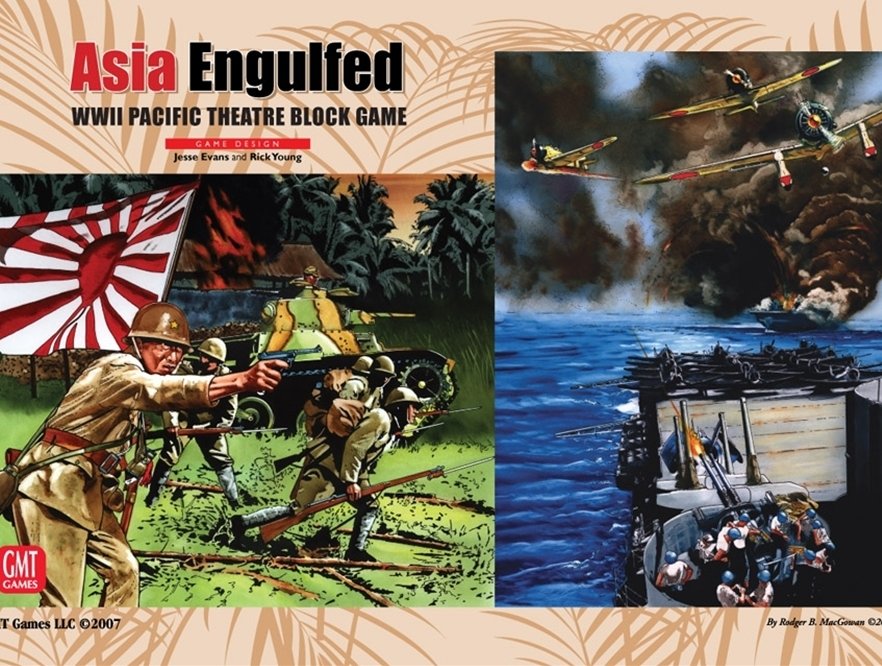 Asia Engulfed is a complete standalone game or it can be combined with Europe Engulfed to simulate the entire Second World War. A complete set of combined game rules allow for unit transfer, production allocation, and combined victory conditions.

Asia Engulfed focuses on playability and making players feel the pressures their historical counterparts were under. Players actually feel the pressures and stresses felt by the strategic level commanders in the real war. The game achieves this level of playability without sacrificing historical detail. The entire campaign is playable in 6-to-9 hours once players become familiar with its elegant game systems.

Wood blocks are used for both land and naval units to provide a realistic fog of war. Different colors are used for not only the different nations but also for land and naval units so there is no confusion as to what is what and who is who. Only the controlling player knows where their elusive carriers are until combat is engaged. Players will have to decide during their naval reaction move if they have the guts to intercept the enemy's unknown forces.

Asia Engulfed incorporates a unique and simple system to realistically portray the Japanese resource limitations. The further your empire expands from Japan the harder it is to supply and operate your far-flung forces, not to mention defend your perimeter with a navy limited by its oil reserves.

All three are in play and potential targets for Japanese expansion. Could any of them been captured if Japan had focused its resources? While it isn't likely, they are targets that the Allies have to defend and often seem just out of reach. Optional rules can bring the Soviet Union into the game.

Air assets are critical to a successful campaign in the Pacific, influencing both movement and supply. A carefully designed area map allows air units to exert control into adjacent areas and move across areas to the next airbase without having to worry about tracking range or counting hexes. Carrier air assets are represented by their own counters allowing for their losses to be tracked separately from the carriers and for the Japanese to husband their elite pilots.

The naval system is totally redesigned from Europe Engulfed and along with the air system an integral part of Asia Engulfed. Basing limits, extended range movement, naval reaction movement, carrier day or surface ship night combat, surprise effects, port attacks, invasion support, it's all there and when combined with block limited intelligence and a healthy dose of lady luck every engagement brings the thrill of a potential victory and the fear of a devastating defeat. Even submarines get to put in an appearance as they try to pickoff stragglers.

Asia Engulfed Game Turns represent two months each and production and strategic warfare takes place within each of these turns. Production levels are easy to calculate and production choices include Special Actions, Aircraft Carriers, Battleships, Cruisers, Submarines, Land Based Air and Carrier Based Air units, Infantry, Marines, and an assortment of strategic assets. The USA conducts a strategic submarine campaign against the Japanese naval transport system and later in the war is able to direct strategic bombers over Japan.

Special Actions are an innovative rule system to allow for not only extended operations during the course of a normal two month game turn but also to represent each sides unique capabilities. From code breaking to emergency rebasing, special actions provide a wealth of options for the player who has been able to commit the necessary resources to build them.