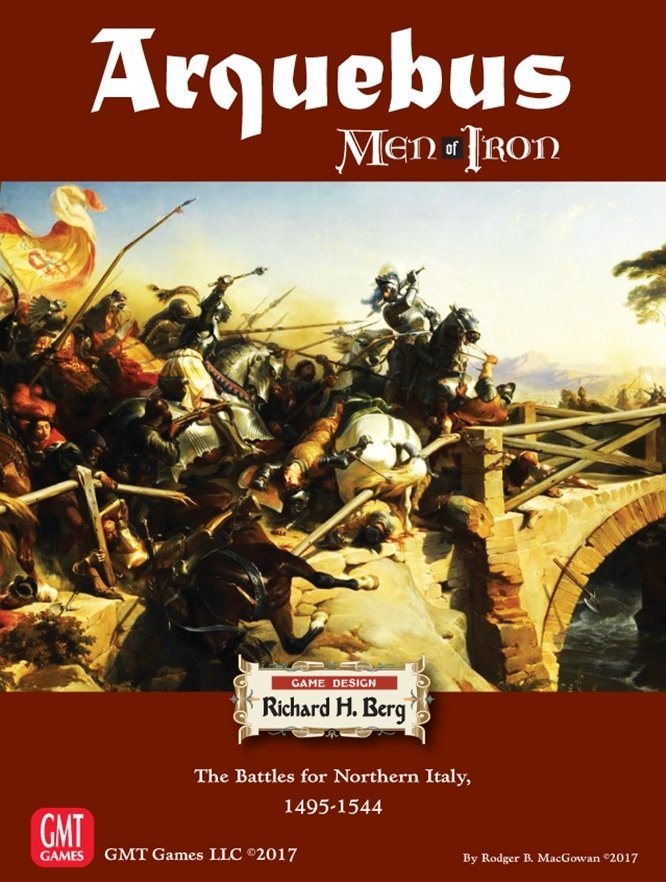 A Military Revolution: A Renaissance in Warfare

Northern Italy - and especially Milan - at the end of the 15th century was the brutal focal point for power and control between France and the Imperialist empires of Venice and Spain. And the battles fought for this prize are a record of the changing face of how war was fought.

At the start of the 'war', the main forces were mounted men-at-arms and a tightly packed and closed formation of pike, especially as represented by the Swiss. But as battle churned into battle, that slowly changed. Firepower, in the form of the arquebus (an early musket) became increasingly prevalent and dominant, forcing the closed pike formations to open up, as the Spanish did (with sword and buckler), and the reliance on heavily mounted cavalry to decrease.

ARQUEBUS shows all of this in true die-rolling glory, featuring 8 major battles: Fornovo, Cerignola, Agnadello, Ravenna, Marignano, Bicocca, Pavia, and Ceresole. These are all really great game-players, with all but two of them half-mappers playable in 3 hours or less. The other two are the 'tiny' page-sized (8" x 11") Cerignola and the big one-mapper, the major, final battle of Pavia. Pavia was a crushing defeat wherein France lost over 50% of its army and almost all of its nobility of command, including her king, Francis I, who was captured. But for gamers, Pavia is wonderful gameplay, with units all over the greatly detailed map, much maneuver and many tough decisions to make.

ARQUEBUS uses the popular "Men of Iron" mechanics with much concentration on detail of weaponry, from the differences between closed formation and open, to the decline of the Swiss (pas d'argent? pas de Suisse), and the rise of the German Landsknecht, the major force in warfare of the era and, ironically, the best-dressed men in Europe. Yes, Landsknecht uniforms literally set the fashion trend at the time for the entire western world.

And to match this sartorial splendor will be the great visual look of ARQUEBUS, from the colorful units to the splendid maps and helpful charts. Most the battles are good for solitaire play, so when you're traveling to roll those dice, remember to “Take the 'BUS!”