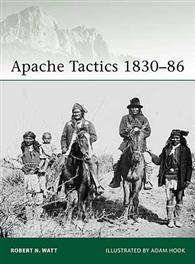 The Apache culture of the latter half of the 19th century blended together the lifestyles of the Great Plains, Great Basin and the South-West, but it was their warfare that captured the imagination. This book reveals the skilful tactics of the Apache people as they raided and eluded the much larger and better-equipped US government forces. Drawing on primary research conducted in the deserts of New Mexico and Arizona, this book reveals the small-unit warfare of the Apache tribes as they attempted to preserve their freedom, and in particular the actions of the most famous member of the Apache tribes – Geronimo.

Introduction: Historical summary of Mexican and American confrontations with the Apache peoples

Environment & culture: the terrain of Apacheria – the Apache adaption to conditions – the raiding culture – training and leadership