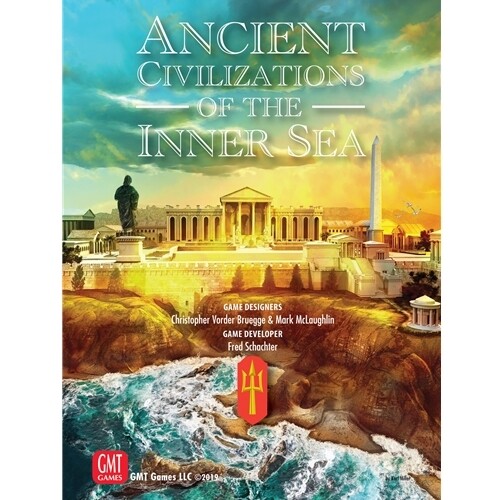 Ancient Civilizations of the Inner Sea is an exciting, easy-to-learn, easy-to-play but challenging to master abstract game in which players guide the renowned and legendary civilizations that surged and receded around the shores of the Mediterranean, which the Romans aptly called the Mare Internum, or Inner Sea.

Ancient Civilizations of the Inner Sea is not just one game but many games. From one to six players will take the role of one, two, or even three of these civilizations as they compete across up to four epochs on land and sea, seeking to survive a host of potential natural disasters while making their indelible mark on history through conquest and the building of cities and great Wonders: thereby becoming the dominant power of their age.

A Game for One or Up to Six Players

Extensive Solitaire Rules allow any scenario, including the basic game, to be played by a single player against one or more Non-Player Civilizations (NPCs). The NPC component may be peaceful or hostile, or change their attitude depending on the actions of the player. Historical War Game Scenarios offer particularly aggressive Solitaire system-controlled opponents for those who want to fight to expand or defend their civilization.

If you want a War Game, let it begin here -- but if you want a friendly game, this is it!

Ancient Civilizations of the Inner Sea can be all about war - but it does not have to be. It can be a friendly game of exploration, city building, trade, and the construction of up to seven Wonders such as The Great Pyramid. Any player or players, solitaire or in a group of up to six, can make of Ancient Civilizations what they wish or imagine. Competition can be martial or cultural, warlike or friendly, or a combination of both - how the game plays depends entirely on how the player or players want it to play.

All this takes place in a backdrop of natural disasters such as earthquakes, volcanoes, floods, and famines inflicted by player or the solitaire game system. Furthermore, a vast array of invading barbarian hordes can descend upon a civilization's lands to wreak woe and havoc upon it.

FOR THOSE WHO WANT A WAR GAME, HOWEVER, THERE IS PLENTY OF WAR TO BE GAMED...

Historical War Game Scenarios are just that -- fun and entertaining scenarios for one or more players that recreate: the Fall of Rome, the wars between the Greeks and Persians, the conquests of Alexander the Great (or the Defense of Persia by Darius against Alexander), the challenges faced by the God-Kings of Egypt, and the campaigns of Hannibal. All of these, and more, can be played Solitaire against Non-Player Civilizations, or between two and, in some cases, three or more players.

Select scenarios recreate the situation at the start of the Punic Wars or the Roman Civil Wars of Caesar vs. Pompey and Anthony and Cleopatra against Octavian. Other game set up options can cram players into half or two-thirds size maps that all but force them to fight. There are even double-civilization and double-sized civilization options for those who want to conquer the world of Ancient Civilizations of the Inner Sea.