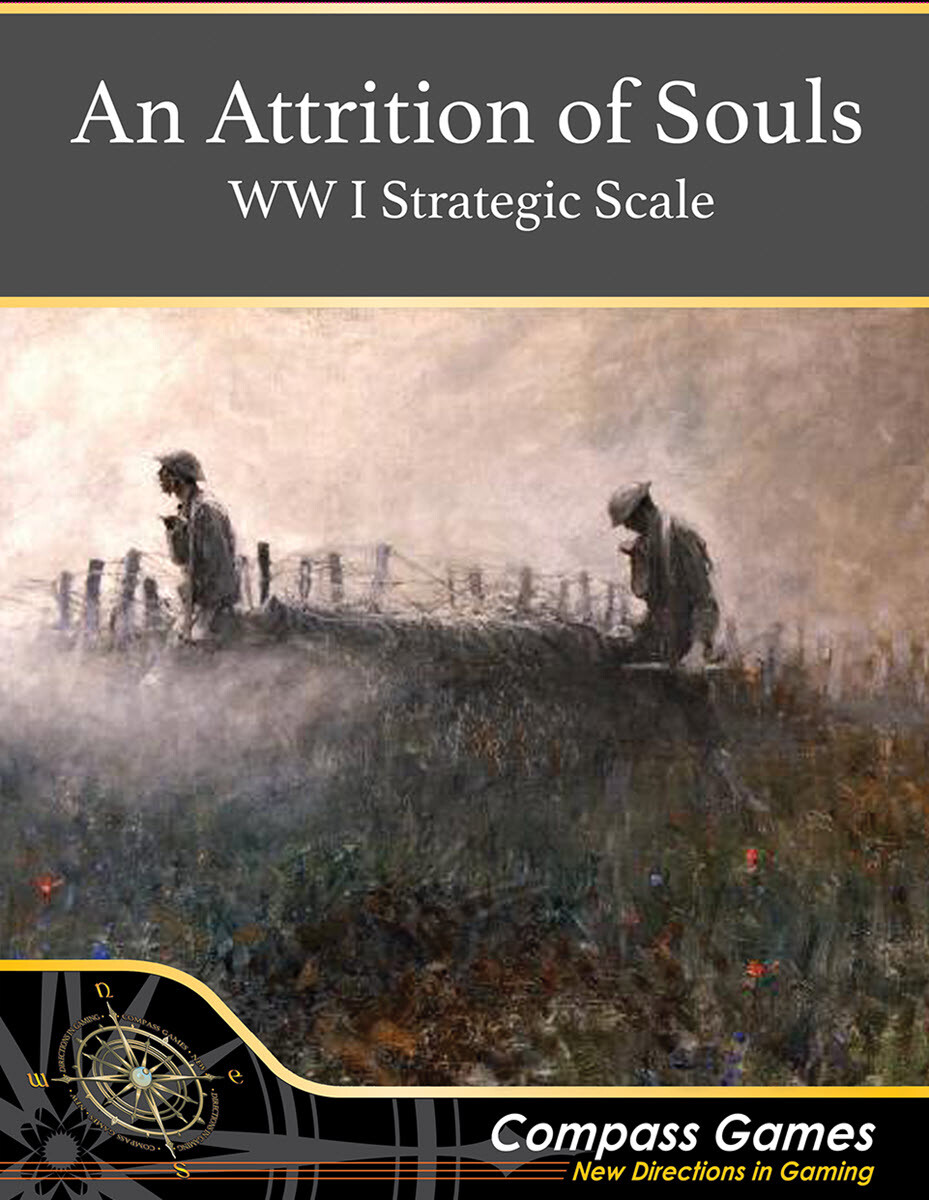 An Attrition of Souls

Armies are marching and the lamps are going out all over Europe. From the trenches of Flanders to the steppes of Russia, two colossal military blocs are about to engage in brutal conflict, from which only one can emerge victorious. It is up to you to take control of one of these great alliances. Plot your moves carefully, for within an hour Europe’s fate will be decided.

An Attrition of Souls is a light, fast-paced wargame at the strategic scale covering the Great War, designed with a high degree of replayability—no two games play alike. This deluxe game with mounted mapboard and large game counters features a unique tile-placement system to simulate the First World War. Each turn, you will randomly draw tiles from a pouch based on your industrial points and use them to the best of your ability. Game strategy is key due to the unforgiving combat system capturing the horrific attrition of this conflict; the dice offer no bloodless victories or reprieve for either side.

Surrounded by enemies on all sides, the Central Powers must strike aggressively at the outset of the war. The Central Powers player will be forced to decide whether to hurl the lion’s share of his forces across the Belgian border, or take an a-historical path eastward to crush the Russian bear. Keeping momentum is key as the war must be fought on enemy soil if you are to have any chance of victory.

Initially outgunned and outclassed by the German army, the Entente player must choose where to hold the line and where to cede territory. The vast hinterlands of the Russian Empire offer you some defense in depth, but Russia, susceptible to attack by the Germans, Austrians, and Turks, has the potential for sudden collapse. New allies will join your cause over the course of the conflict, but if they declare war too early, before they are fully prepared, they may turn into nothing more than additional land for your opponent to devour.

An Attrition of Souls also offers great variability regarding the length of the war. Some games will end with decisive victories in 1915 and other will draw out into brutal stalemates that last until the end of 1918. No two games play alike. Added to this is a plethora of optional rules that bring additional historical depth to the game as well as balancing the game for players of different skill levels.