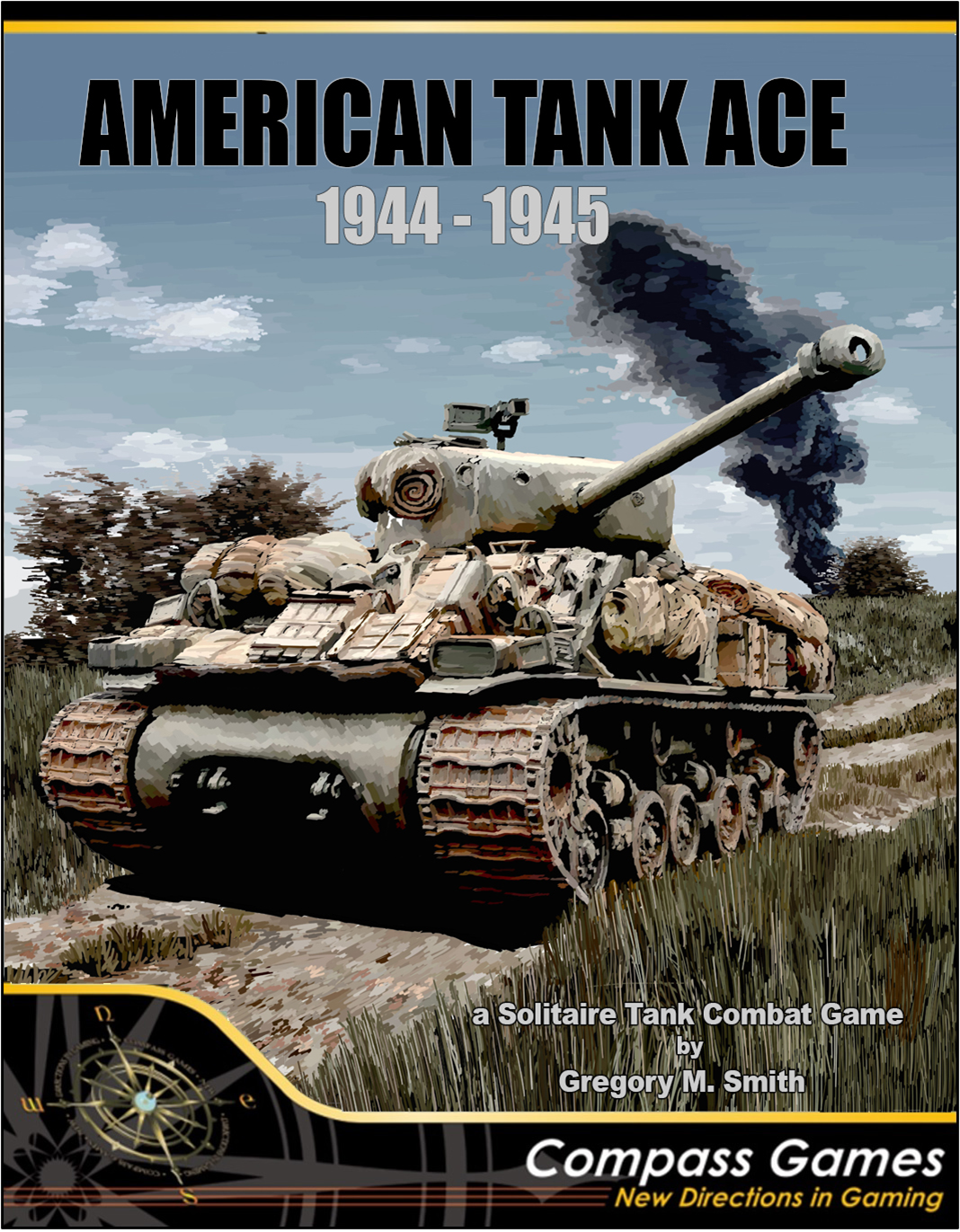 The Second World War has dragged on for 5 years.D-Day marks the Allies’ promise kept to the Soviet Union in opening a second front. American armor fared reasonably well in North Africa against second line German and Italian tanks, but in Normandy they faced Panthers for the first time and received quite the shock. The German tanks were severely outnumbered but exacted a terrible toll on the mostly Sherman tanks of the U.S. Army.Fortunately, the “Arsenal of Democracy” had been hard at work continuously improving and upgrading the Sherman tanks, and improved versions were delivered to the frontline units as the war continued. Sherman tank commanders, however, start just after the Normandy Invasion and are out-gunned and out-armored as they fight to end the Nazi threat to humanity.

American Tank Ace: 1944-45 is a solitaire, tactical level game that places you in command of a U.S. tank during World War II in the European Theater of Operations.You will make the tactical decisions a tank commander faced and control the actions of your crew, while trying to survive.

You will be assigned missions to attack, defend, or conduct movement to contact depending on the current tactical situation. As time progresses and players survive, they may use the experience gained to improve their odds of success by purchasing skills. As their prestige increases, they may request improved versions of the Sherman tank when they suffer the loss of their previous tank. Awards and promotions help to narrate the player’s eventual goal – to survive the war and help defeat Nazi Germany.

Players will find it extremely challenging to survive an entire tour from June 1944 to April 1945, at which time the game ends. You will start with one of the tank models available to the Army the start of the game, but as your fame and prestige rise, more advanced tanks will be available to choose from.

The system is packed with rich technical detail based on the actual tanks used by U.S. forces. The five double-sided Tank Display Mats (10 different tanks) provided correspond to each tank type available to the player. This mat helps track the status of your tank and systems, including available weapons and ammunition at your disposal. The available tanks are:

Game play moves quickly, following a set sequence of events that are repeated until the end of the game. Once you have your initial tank and commander, play proceeds by rolling for a mission and conducting it. Sometimes you’ll be assigned to attack, defend, conduct a movement to contact, assault a prepared enemy, or even sit out while waiting for supplies. Enemy forces range from Penal units all the way up to SS and Fallschirmjaeger and are randomly generated, ensuring no two careers will ever be the same. Combat is swift and sometimes deadly, as almost all of the German tanks, SPGs, and AT guns can penetrate you. Terrain and weather also have an impact on operations, as well as smoke. Players must pay attention to hull down status, the orientation of their hull and turret, and decide when it is prudent to “button up.” Artillery and mortar fire can sometimes support either side, and random events will add to the uncertainty of combat.When each mission is completed, assuming you have survived, you will ascertain if any awards have been earned or experience points gained. Promotion is also possible, which has the advantage of allowing for artillery and mortar support. You may also upgrade your tank if you have sufficient Prestige to get a better model, otherwise, you continue to fight in your starting tank until it is knocked out.

This game has some similarities to the old classic “Patton’s Best” but the combat system is completely different and lends itself to faster, more streamlined play. A typical mission can be performed in 10 minutes or less, allowing for quick set up and take down when short gaming sessions are all that are available to you. While American Tank Ace is designed as a solitaire gaming experience, additional options for play are provided for both multi-player cooperative and competitive gaming sessions.

American Tank Ace: 1944-45 is meant to be a highly playable and interesting solitaire game covering the actions a tank commander would have to deal with in Europe.