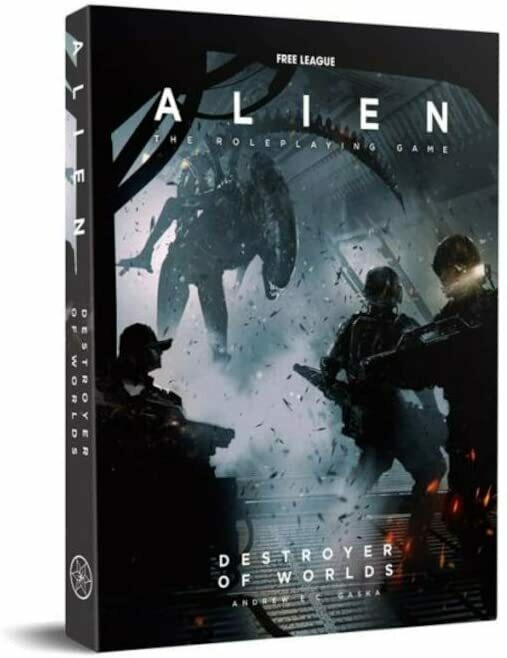 The mission was a manhunt, the objectives clear—track down four fugitives, recover any assets they may have made off with, and keep ‘em all out of enemy hands. Go find them on a frozen moon full of hostiles and get it done on the eve of war.

Nothing you couldn’t handle.

But what it is that these bastards stole—and how the hell it got inside them—is another thing altogether. It’s all above your pay grade, marine—but somehow you’re the one who’s got to deal with it.

Of course, now there’s an invasion fleet incoming, and there’s something else, too—something much worse. Something out there hates you—hates everyone. Something big and ugly. Something with metal teeth—and you’re pretty sure it ain’t alone.

Yeah, the mission was supposed to be a simple manhunt. Instead it turned out to be just another glorious day in the corps.

Destroyer of Worlds is a complete Cinematic Scenario for the ALIEN roleplaying game, written by sci-fi novelist Andrew E.C. Gaska just like Chariot of the Gods. In Destroyer of Worlds, players take the roles of Colonial Marines. The scenario is designed for 3–5 players plus the Game Mother, and it’s a gauntlet of one hell after another. Expect it to take three sessions to complete.