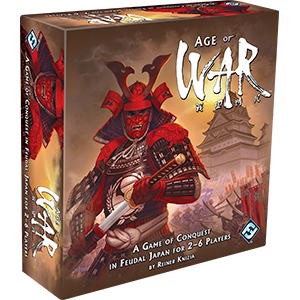 Everything can collapse. Houses, bodies, and enemies collapse when their rhythm becomes deranged. In large-scale strategy, when the enemy starts to collapse you must pursue him without letting the chance go. If you fail to take advantage of your enemies' collapse, they may recover.

Age of War is a fast-paced dice game for two to six players, designed by Reiner Knizia and set among the warring states of feudal Japan. In the game, you and your fellow players take on the roles of rival daimyos attempting to unite the Japanese clans by mustering your troops and conquering castles.

During play, you muster troops by rolling seven custom dice, and you use these troops to lay siege to one of fourteen different castles, each of which requires you to assemble a unique combination of troops in order to conquer it. Castles grant points towards your victory, and you can gain more points by uniting an entire clan. The daimyo with the most support at the game's end is the victor!