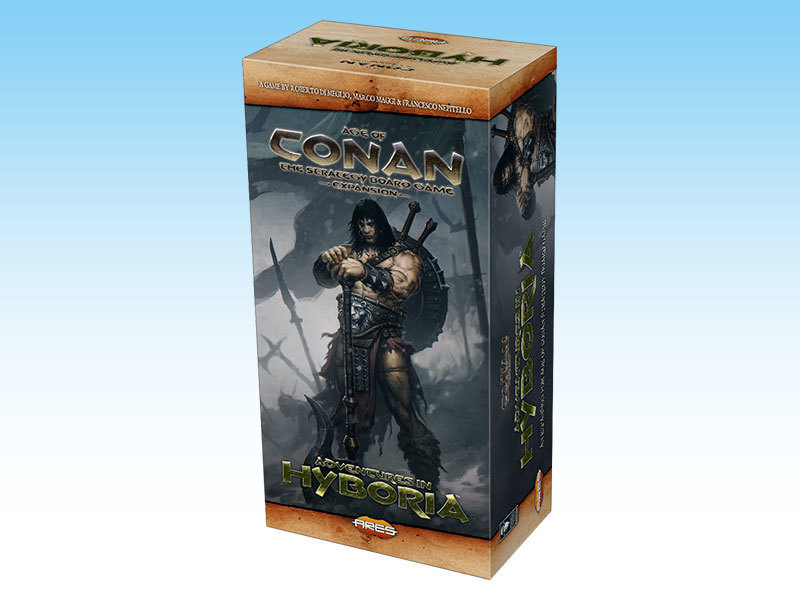 Age of Conan: The Strategy Board Game - Adventures in Hyboria

Adventures in Hyboria is an expansion of Age of Conan Strategy Board Game designed to improve and expand the role of Conan in the game. It adds a new dimension to his adventures: Conan's stature grows from warrior and thief, to general, and finally, king. His abilities grow as well, making his presence in the game more visceral and more important.

Adventures in Hyboria adds other new mechanics and game elements. The Hyborian Age is not a time of all-out conflict, and the game includes several paths to victory beside warfare. This remains true in Adventures in Hyboria. The expansion opens more opportunities for player-vs-player conflict, such as, for example, the new rules for Spies and Prisoners.

Conan – From Warrior to King - In Adventures in Hyboria, Conan's adventures are tracked by a special board, charting his progress from lowly beginnings to the most powerful throne of his age. His life is divided in three stages: Warrior, Mercenary and General. With each adventure, Conan gains experience, and develops from one stage to the next, becoming more and more powerful. He can only become King if he reaches a certain experience level, so not every game may end with Conan being crowned.

The Mood Wheel - As readers of REH's stories well know, Conan is capable of bouts of energy and fits of melancholy. This is represented by the Mood Wheel. Conan's "stats" are used to resolve stories - his Strength, Agility and Cunning - and they improve as the Barbarian gains experience - But Conan's mood also must be considered, as the current value on the Mood Wheel modifies his rolls!

New Conan Dice - Conan's effect on the game varies as he develops from Warrior to King: A different special die is associated to each stage, to be rolled whenever Conan is involved. The dice also includes new results, like "Gold" (Conan needs gold to be hired) or "No Sorcery".

Story Cards - Story Cards add a greater level of detail to Conan's adventures, and add a new level of interaction. In Adventures in Hyboria, each player has a hand of Story Cards. As Conan travels across the land, you may play a Story Card as soon as he's in an appropriate location. Then, you try to complete the Story, using the new mechanics (Conan's stats and mood). If you are successful, not only you reap the rewards, but you also have a chance to take control of the Barbarian away from the current Conan player.

Companions - From Taurus to Valeria, from Bêlit to Juma, many of the best Conan stories feature great characters fighting alongside the Barbarian. Now these characters are also featured in the game, appearing during an adventure and used to specific effects (normally to help Conan during a Story).

Spies - Often, wars are not won with armies alone, and Hyboria is far from an exception! Spies are a new playing piece available to Kingdoms. At the beginning of an age, they are spread out all across Hyboria. The presence of a spy can help your chances to conquer a Province, forge an alliance, or hinder the attempt of your enemies to do the same.

Conan has quite a dislike for this sneaky, 'civilized' way to deal with conflict, and the presence of the Barbarian often has a fatal effect on a Spy...

Prisoners - Slavery and ransomed hostages are common occurrences in Hyboria, and the rules for Prisoners are meant to represent this. The possibility of ransoming back your defeated troops and exchanging prisoners means the loss in player-vs-player conflict is less punishing than before, especially in multi-player games, adding yet another level of player interaction.

New Kingdom Cards - Kingdom Cards give each player the ability to "break the rules", providing each Kingdom a unique gameplay flavor. With many new mechanics added by Adventures in Hyboria, new Kingdom cards allow players to manipulate them and further differentiate the abilities of Aquilonia, Hyperborea, Stygia and Turan.

This is not a complete game. A copy of Age of Conan Strategy Board Game is required to use this product.