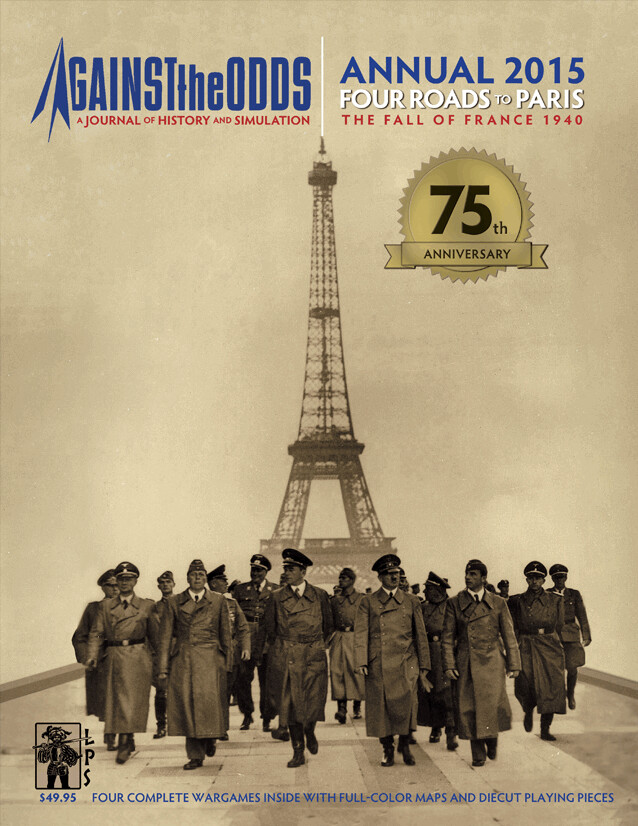 Against the Odds - Annual 2015: Four Roads to Paris

Shortly after Poland was conquered in 1939, Hitler begins urging an immediate attack in the West. The original plans were uninspiring and his generals feared an attritional stalemate. Over the winter the Germans keep taking the measure of their opponents and hit upon a plan was that inspired, risky, and utterly decisive. Ironic of Hitler to assume his remarkable success was simply the new template for all future campaigns. His eyes turned east....

But why, exactly, did France fall? This ATO Annual edition features four top designers all tasked with re-examining the 1940 campaign and answering that very question. They’ve each settled on a single overriding theme to focus on. Yes, here is an issue not just featuring a game or two, but four complete simulations that provide hours and hours of challenging play and comparison. Don’t miss it!

John Prados with "The Seeds of Disaster" –

Examines how pre-war plans and on-going intelligence and counter-intelligence efforts, deceit and deception, and foolishly projecting one's own motives on the enemy were THE key factors in explaining what happened in 1940.

Michael Rinella with "Springtime for Hitler" –

Explores the angle that the Germans at this time were quite simply indeed "supermen" at the top of their game. Possessing the best tactical airforce, the best plans and doctrine, well-motivated by National-Socialist ideology, and/or possibly sky high on "panzer chocolate," (Pervitin) they were unstoppable. Or were they?

The most unusual of the four games, the two players are Britain and France respectively, nominally allies, against an automata German player governed by the game system. Did the French do themselves in by folding up too early on? Or were they also done in by their British allies? Choosing to bug out quickly without informing their "hosts" the British then refused the French any extra help, instead husbanding their resources for defense of Great Britain.... In this game both players may cooperate to win, but absolutely must position themselves to secure their national interests if France does fall.

A solitaire design that illustrates how just a few crack German divisions paralyzed the Allied decision cycle to produce a catastrophic failure on the Allied side. But the better the German player does may well panic his own High Command into ordering a halt!

"Four Roads to Paris" offers four complete simulations that will provide hours of challenging play and comparison. And as always, the Annual features an "extra-size" magazine, with an in-depth look at the history behind the games, plus other articles. Make yourself the proud owner of this challenging look at the campaign that shocked the West.

Bonus Item: Include the new Pocket Battle Game on the capture of Fort Eben Emael. On May 10th 1940, a handful of German troops using gliders landed directly atop Belgium’s strongest fort and took it out in an hour! Try it yourself with this two player game covering this key event in the fall of France.