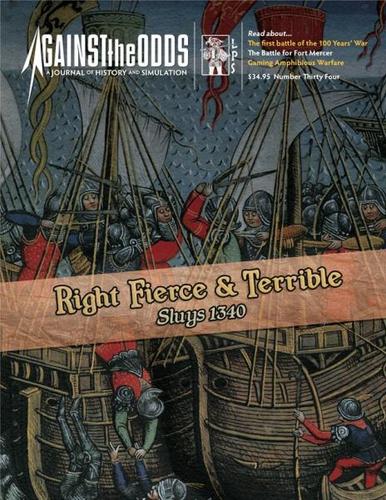 Most people think of the 100 Years War as a battle over the geography and dynastic questions of who would rule which parts of France.

The 100 Years War is known for sieges, sacking, lots of misery, a few large battles like Crecy and Agincourt, and famous leaders like the Black Prince and Joan of Arc. But naval battles?

Actually, the first significant action of the Hundred (and 15) Years War took place off the coast of Flanders in 1340. And changed everything. The French had been dominating the Channel, largely through the services of hired Genoese galleys. They sacked several English cities and spread terror and dissatisfaction (with Edward) amongst the population, halting the wool and wine trade, plus spreading the very real fear that the French might invade. The Battle of Sluys was a decisive victory for Edward III that gave the English command of the Channel and insured that the rest of the war would be fought on French soil.

Now, this important but little known battle is yours for the trying, with Right Fierce & Terrible: The Battle of Sluys, the game and core of ATO #34. Place yourself in the decisions faced by Edward III or the French admirals as you decide who will rule the waves and perhaps rule France. But, if your expectations of the period center on arrows, swords, and the deadly close-in fighting of armored knights, RF&T is still the game for you. One might almost ask, “Is it a naval game or a land game? And the answer is “both.” Archery, ramming, grappling, and desperate melee are the tools of battle here, aimed at wearing away the enemy fleet’s morale.

Your morale will enjoy the color, 22 x 34 inch map and full ONE INCH counters, and your mind will enjoy the intrigue of designer Jeremy White’s unusual game system, in which the “battlefield” of harbor and estuary is “built” as the game progresses, meaning that no two experiences will be quite the same. SEVEN scenarios allow you to explore the questions that have puzzled historians for years, and the two-three hour game play and quick-set-up diagrams mean you can try one approach and swap sides to try another, knowing much will be different this time around. Jeremy’s rules are very accessible and include extensive examples of play. Edward III was wounded at Sluys but won one of his most important victories. Can you change history?

Bonus Game Inside! Also included in this issue is a second, bonus game. Schwarm! is by the same designer as RF&T above, Jeremy White (along with co-pilot Mark Aasted). This small solitaire game depicts a common event from WW2, some German fighters trying to pick off a stray B-17.