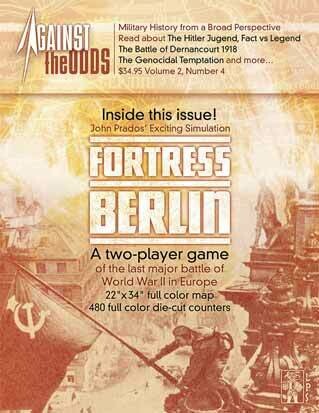 Against the Odds #08: Fortress Berlin

Fortress Berlin is a two-player tactical / operational simulation of the last major battle of World War II in Europe, the assault on Berlin.

Playing pieces represent the actual units that took part in this fight, along with some optional forces that might have become involved but did not do so.

The mapboard depicts the essential portions of the city of Berlin, including both the outer suburbs and the inner fortified line perimeter.

This ranges from Treptow in the east to Spandau on the western side; and covers the area from Wedding-Pankow down to Mariendorf-Zehlendorf on the north-south axis. The final German defense zone (the "Citadel") formed by the Spree River around the center of Berlin, is clearly recognizable as well.

Map scale is approximately 500 yards (457 meters) to the hex. Each Game Turn represents around one day with ground units ranging in size from a company up to a division.

The game features complete and comprehensive solitaire and multi-player rules. Players can assume the role of Hitler's underlings and squabble over who is "truer" and more devoted to the Fuehrer's cause. Or play out the rivalry between Zhukov and Konev to be the first to capture Berlin and present the city to Stalin. Optional rules explore the impact of Steiner's III SS Pz. Korps or Wenck's Twelfth Army intervening.

Fortress Berlin and issue #8 of ATO: