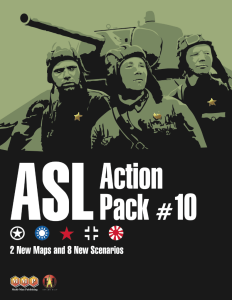 Action Pack #10 features two new 8" x 22" maps (board 69 and board 70) of largely open countryside with a small village, and 8 scenarios which use them.

Action Pack #10 is not a complete product and assumes the buyer owns the core Advanced Squad Leader game system.