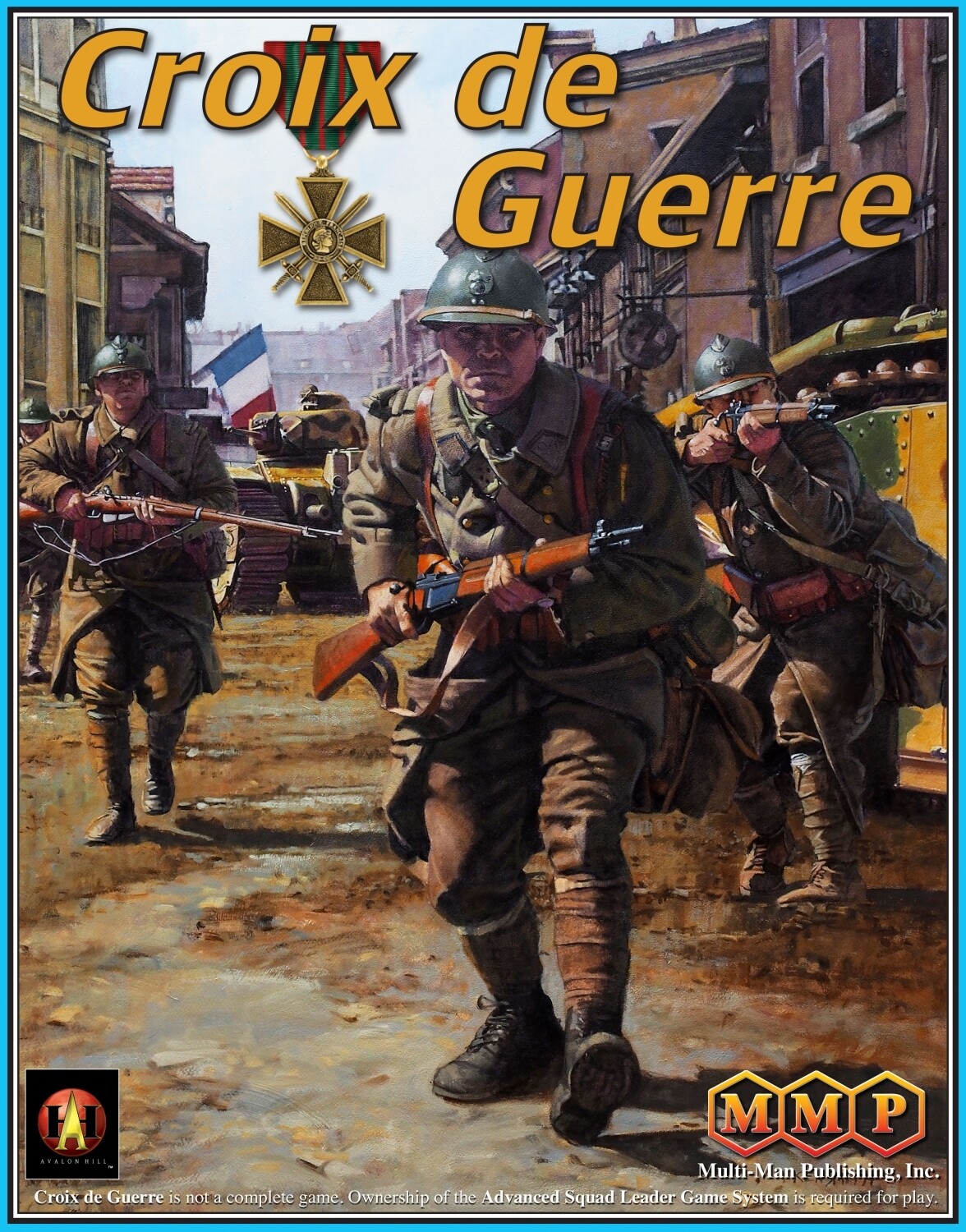 PLEASE NOTE: Game box is sealed, however the bottom of the box was dinged up in shipping which created a split in the box. MMP has provided a new box which will be included with your order.

CROIX DE GUERRE brings the French order of battle back into print and adds DINANT: ROMMEL AT THE MEUSE, the brand new Historical ASL campaign on the crossing of the Meuse in May 1940. In addition to the original eight CdG scenarios and the ten new DINANT scenarios, CROIX DE GUERRE includes 22 more out-of-print French scenarios updated for balance and clarity plus a bonus 1944 scenario on the Dinant map. Also included are mapboards 42 and 43 and a revised National Capabilities Chart. CROIX DE GUERRE not only provides the standard French blue counters for use in 1939-40, but also provides for the first time unique infantry counters for the Vichy French regime’s overseas colonies (two-tone French-blue-in-German-blue) and for the Free French (standard French blue with a Cross of Lorraine). That means all the personnel, weapons, and uniquely French vehicle counters used by French forces throughout World War II, as well as the detailed Chapter H historical notes to accompany the counters and revised Chapter A rules to reflect the new French infantry counters.

DINANT: ROMMEL AT THE MEUSE takes players through the rapid movement of Erwin Rommel’s Panzer-Division 7 across the Meuse and through the “impenetrable” Bois d’Ardennes and shows the fighting at the southernmost portion of the river crossing at the town of Dinant during 11-14 May, 1940. Facing the Germans were the exhausted men of the 18th Infantry Division, who had marched almost 50 miles in the preceding three days. High Command had stripped from them all their 60mm mortars, almost half of their motorized transport, and many of their 25mm anti-tank guns, giving those to units “more likely to face action.”

DINANT: ROMMEL AT THE MEUSE features two historical 22˝×34˝ map sections with several new terrain types—Road Tunnels, Railroad Embankment Underpasses, 15th Century Fortresses, Weirs, and Retaining Walls. The 10 scenarios showcase fighting at and around the area of the crossing. Players will navigate through a maze of narrow streets alongside the Meuse River at the bottom of 90´ high cliffs and then climb to the plateau above. The Campaign Game will also see the German player building pontoon bridges and assembling ferries for men, tanks, and equipment to cross the river, all while under fire.

CROIX DE GUERRE is therefore much more than a mere reprint of its predecessor and showcases the French army as never before. Vive la France!

The 22 out-of-print French scenarios included are:

232 Chance d’une Affaire: In the German OB set up instructions for Infanterie-Regiment 1, change “R4” to “N4”.

French AM Dodge(a): The counter with identity letter “F” should have a 2-FP AAMG.