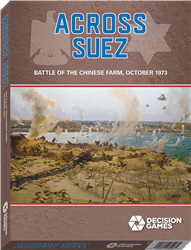 Across Suez: Battle of the Chinese Farm, October 1973

On 6 October 1973, troops of the Egyptian Third Army performed a masterful surprise crossing of the Suez Canal, overwhelmed the emplaced Israeli defenders along the Bar Lev line, and established themselves in force on the Sinai. For the first time in over two decades, the vaunted Israeli Defense Force had been dealt a stunning defeat. But even before the magnitude of the defeat could be digested, and well before the desperate defensive efforts to halt the Egyptian and Syrian advances in the Sinai and Golan had fully succeeded, Israeli military leaders were planning a counter-crossing of the Canal with the object of isolating the entire Egyptian Third Army.

Israeli reconnaissance discerned a gap between the Third Army and the Egyptian Second Army to its north. On 15 October, with the way apparently clear to a crossing at the northern tip of the Great Bitter Lake, three Israeli divisions and a convoy of bulky bridge sections began to advance—only to collide with the Egyptian 15th Infantry and 21st Tank division, thus initiating the wildest and most important battle of the October War.

Across Suez is an operational level simulation of the Battle of Chinese Farm, with one player controlling the forces of the Egyptian Second and Third Armies, and a second player controlling the units of the Israeli Defense Force. Included are special rules for commandos, paratroopers, and Egyptian Marines that were not in the original edition.